The Abandoned Cave Elden Ring location is one of the most concealed places in the game. And that’s really an achievement in a game with so many hard-to-spot locations. It’s no wonder that players are having a hard time finding the Abandoned Cave. Nonetheless, knowing where to find the Cave will prove to be valuable. Once you know the location, you’ll need to solve an interesting puzzle inside the cave, and you’ll be rewarded with the Gold Scarab. In this guide, we will explain where to find the Abandoned Cave and how to get the Gold Scarab. 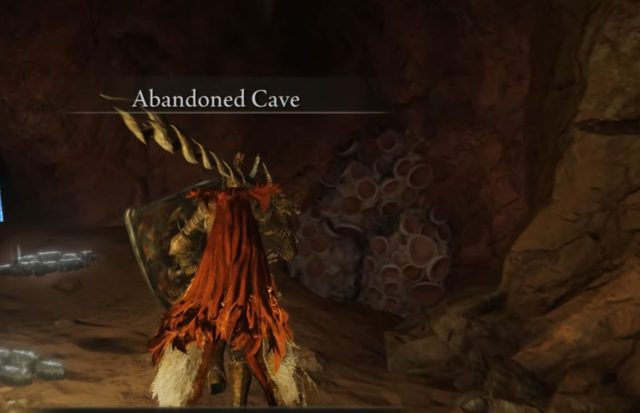 How to complete the Abandoned Cave?

Where to find Abandoned Cave in Elden Ring

Elden Ring’s Abandoned Cave location can be found in the Caelid region. Caelid is one of the major regions in the Lands Between, situated east of Limgrave, the first region you’ll visit in the game. Caelid is characterised by stormy weather and reddish shades due to corruption, and it’s littered with the undead. You’ll find the Abandoned Cave just east of the Smoldering Wall site of grace. Alternatively, you can start your journey from the Fort Faroth site of grace, and go along the cliff to the west. At one point, you’ll encounter a ravine with exposed roots. Jump down the rocks carefully, and you’ll enter the Greyoll’s Dragonbarrow area. At the very bottom of the ravine, you’ll see an entrance to the Abandoned Cave. Check out this YouTube clip for a video-based guide

How to Get the Gold Scarab in Elden Ring

You’ll find the Gold Scarab as a reward at the end of the Abandoned Cave in Elden Ring. Like everything else in Caelid, the Abandoned Cave is corrupted to the core. Inside the cave, there’s a special type of rot, called Scarlet Rot. The rotted area is incredibly harmful and can delete your health extremely quickly if you are not careful. Try to move as fast as you can through the rot. Use the edges of the cave walls to find some shortcuts and avoid the red sludge if possible. This is important because you’ll need as much health as possible for the mini-boss fight at the end of the cave. To clean the damage-over-time (DOT) effect, use Preserving Boluses or the incantation “Flame, Cleanse Me”. Contrary to some belief, rolling through the sludge doesn’t help.

Once you find your way to the bottom of the Abandoned Cave, you’ll need to fight two Cleanrot Knight mini-bosses. The Cleanrot Knights are not especially hard to kill, and players report that The Zweihander does the job rather easy. Slay them and they’ll drop the Gold Scarab. The Gold Scarab is an extremely powerful Talisman that increases runes obtained from defeated enemies. The sooner you get it in the game, the more value it will bring.