The Comet Azur legendary sorcery is one of the most powerful damage spells in Elden Ring. If you are playing a mage/spellcaster build, you will want to put your hands on this spell of mass destruction as soon as possible. In our opinion, Comet Azur is probably the strongest legendary spell (or sorcery) in Elden Ring. Read on to learn where to find Comet Azur. 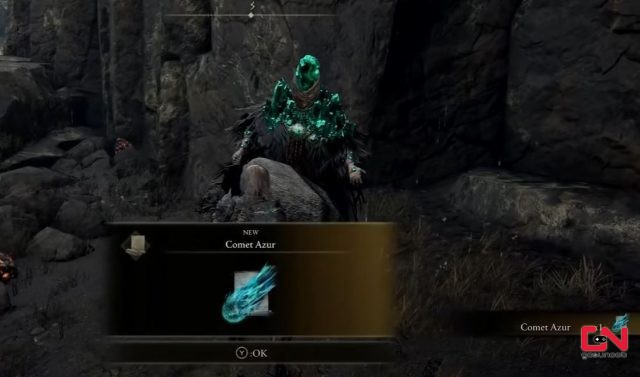 Where to find Comet Azur, one of the strongest legendary spells in Elden Ring

How to Get Comet Azur in Elden Ring

If you are looking for the strongest spell in Elden Ring, look no further. Elden Ring’s Comet Azur is insanely powerful legendary sorcery, and you can get it from Primeval Sorcerer Azur. In order to find Sorcerer Azur, head to the Seethewater Cave entrance, just northeast from Volcano Manor. From there, follow the path to the west through the gorge until you reach the Seethewater Terminus site of grace. Once there, turn left and head to the south along the shore of a lava lake there. Pass the lake and continue in that direction, as the path will naturally lead you to our location. You’ll essentially go around Mt. Gelmir.

At the very end of this path, after you pass the Craftsman’s Shack, you’ll come across the Hermit Village, a demi-human village with a boss named Demi-Human Queen Maggie. If you want, you can avoid battle here with some sneakiness, but we advise you to clean the village and defeat the boss. Now all that has left is to speak with Sorcerer Azur. He is located at the very end of the village, just behind where you first encounter Demi-Human Queen Maggie. He is a bluish/greenish crystalline humanoid who sits on a rock. Check out the image below for his appearance. When you interact with him, he’ll remain silent, but he will give you the Comet Azur legendary sorcery.

How to use Comet Azur in Elden Ring

Comet Azur boasts insane damage. When cast, it fires a “tremendous comet within a starry torrent”. And believe us, that’s a sight to behold! And we are not talking just about aesthetics here, as it will also scorch the land it falls on and inflict a massive amount of damage to that area. This power comes at a cost, as Comet Azur requires 40 FP to cast. But to even be able to cast it, you’ll need 60 Intelligence, and three open slots to memorize the spell! With that said, that’s all you need to know about Comet Azur’s location in Elden Ring. Shoutout to Its Shatter for the screenshots, and check out his video for further instructions on where to find the comet!