Elden Ring is populated by some very memorable characters. These NPCs don’t just serve to better flesh out the lore of ER’s setting, but are usually also involved in various quests of their own. Hyetta is one such NPC. This Blind Maiden (that fans have nicknamed Grape Girl) aspires to become a Finger Maiden. But to do this, she requires that you find several Shabriri Grapes as well as a Fingerprint Grape for her. All the while, Hyetta will be moving constantly around, which can make locating her difficult. But if you want to get the Frenzied Flame Seal which she will give you as a reward, you need to put up with this. To save you the time and effort you would have needed to find her, our Elden Ring Blind Maiden, Hyetta Locations guide will tell you all of her locations. 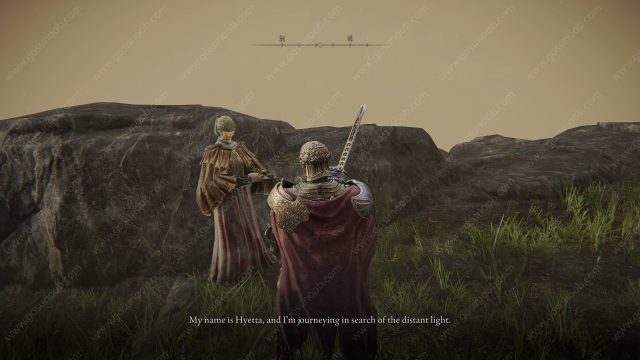 To begin with, before Hyetta can spawn in the game, you will first need to complete the Irina questchain. After that, the first time you will encounter Hyetta the Blind Maiden is at the Lake-Facing Cliffs, in the Liurnia of the Lakes region. She will ask you to help her and donate any Shabriri Grapes you come upon. We have a separate guide on how and where to get Shabriri Grapes and Fingerprint Grape. When you have the first Shabriri Grape, go back to this spot and talk to Hyetta. You will be given a choice of whether to give her a Grape or not. If you choose not to give her the Grape, nothing will happen, so you should give her the Grape in order to advance the quest. You will get the As You Wish gesture as your reward.

Once you bring Hyetta three Shabriri Grapes, she will be very interested in what they look like. Here, you will be given a choice of either telling her the truth (“They’re human eyes.“), or to say nothing. If you select the second option, nothing will happen and the quest will not progress. The next time you speak with Hyetta, she will repeat the same question. You need to tell her the truth if you want to continue with the quest. She will be disgusted by this, and will need some time to process all of this. The next time you speak with her, she will have made up her mind – she wants to be a Finger Maiden. Go to Bellum Church and you will find her there. You can now continue the quest and get her the last thing she needs – the Fingerprint Grape.

The last time you will meet Hyetta is deep below Leyndell, Royal Capital, in the Frenzied Flame Proscription. She will instruct you that, in order to inherit the blessings of the Three Fingers, you need to open the door just around the corner. To do this, you will have to strip all of your weapons and armor. Note that doing this will lock you in a certain ending (which we do not want to spoil here). When you go back to Hyetta after this, exhaust all the dialogue options with her, until she gives you your rewards: the Frenzyflame Stone and the Frenzied Flame Seal.

The Frenzied Flame Seal is a Sacred Seal that has Str E, Dex E, Int E, and Fai D scaling. It boosts Frenzied Flame Incantations, but it also causes slight Madness buildup. The Frenzyflame Stone is a consumable that uses FP to heal your chaos followers.