Like every From Software game, Elden Ring has many, MANY bosses for you to fight. While most of these are purely optional, there are several bosses that you will have to defeat if you want to advance the story and complete the game. The Fire Giant is one such boss. Located in, fittingly, the Mountaintops of the Giants, you need to vanquish this boss to get to the Forge of the Giants. Before being patched out, there was an easy way to cheese and defeat him. Luckily, there is still another way to do this. So, if you were wondering how to Cheese the Fire Giant after the latest Elden Ring patch, we’re here to help you with that. 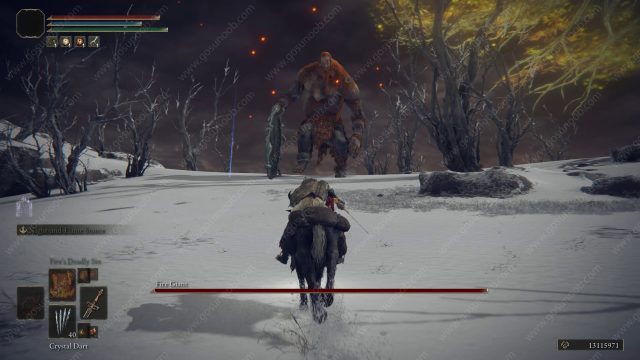 How to Cheese Fire Giant After Patch in Elden Ring

Previously, the way you could easily cheese your way through this fight was by luring the Fire Giant on a cliff and getting him to fall off of it, twice (to deal with both of his phases). This new method is similar to the old one, though it is a bit more involved and will take more time. As before, once the fight starts, lead the Fire Giant to the same cliff. Summon Torrent, and use it to jump to the other side. The Fire Giant will approach the cliff, but unlike his pre-patch behavior, he will not fall down to his death.

Your strategy now is to pelt him with projectiles from afar. You can either summon some Spirit Ashes with a ranged attack (such as Latenna the Albinauric), or do it yourself if you are a magic user. This can take a while, so be patient. Also, just be careful not to let his fireballs hit you, as they can do tons of damage. Once he enters his second phase, the game will teleport you back to the starting point. Lure him to the cliff again and repeat the process until you have killed him.

NEXT POSTHow to Unlock MissingNo in Vampire Survivors Explained