In Elden Ring, you will take on many quests for different characters you will meet during the course of your adventures. One of these is Irina, who will ask you if you can deliver a letter to her father, Edgar. He is located at Castle Morne, so getting to him requires that you battle through quite a lot of monsters on your way there, not to mention the powerful Leonine Misbegotten boss. Once you do deliver the letter to her father, you will probably make your way back to Irina. However, you will find out that she has, unfortunately, been killed. Is there any way that you can save Irina? In this Elden Ring Irina, Deliver Letter to Father in Castle Morne guide, we will answer everything relating to this quest and Irina and Edgar’s fates. 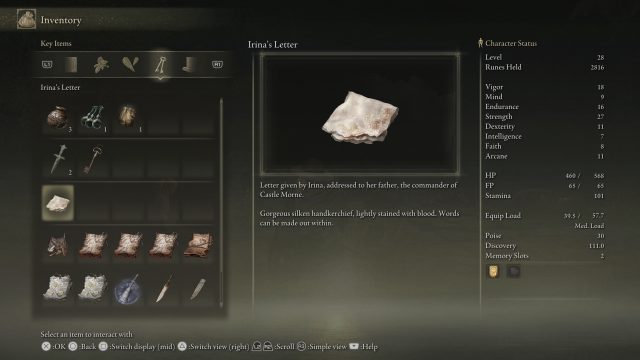 Irina can be found near the Bridge of Sacrifice, on the Weeping Peninsula side. When you talk to her, she will ask you to deliver a letter to her father, Edgar, over at Castle Morne. You can agree to do this or refuse. Obviously, if you refuse, then you won’t undertake this quest. And, if you do, you will then make your way to Castle Morne, which is a ways to the south from this location.

Irina’s father, Edgar, can be found on the top of Castle Morne. This is a pretty big place, so we have marked his exact location in the screenshot below. Approach and speak with him. He will give you a Sacrificial Twig.

When speaking to Edgar, you will get the option to deliver Irina’s letter to him or not. In order to progress the Elden Ring’s Irina questline, you need to give him the letter. Once you deliver Irina’s Letter, Edgar will inform you that he cannot leave yet, as he needs to guard the legendary sword of Mourn from leaving the castle. The sword he is referring to is the Grafted Blade Greatsword. It is in the possession of the Leonine Misbegotten – the boss of Castle Morne. Defeat this creature to claim it. Note that, if you didn’t speak to Edgar in the castle and hand him Irina’s letter before beating this boss, you will fail the quest.

How to Beat Leonine Misbegotten in Elden Ring

The Leonine Misbegotten isn’t one of the most dangerous bosses in the game, but that doesn’t mean that he’s easy, either. Melee characters will likely have the easiest time defeating it, since the Leonine Misbegotten doesn’t have a lot of HP. Coupled with the fact that it is very susceptible to being staggered, makes this a very favorable fight for melee chars. For Ranged and Spellcaster Tarnished, a good strategy to employ here is to use spirit summons that can draw its attention away from you, allowing you to get a couple of shots (or spells) in.

Once you deliver the letter to Edgar and go back to Irina, you will discover that she has been killed. If you have defeated the Leonine Misbegotten and claimed the Grafted Blade Greatsword, you can show it to Edgar, and he will be happy that he is finally relieved of his duty and can go and see his daughter. The next time you see him, he will be standing over her body, lamenting that he wasn’t there to protect her and vowing revenge against those that killed her.

Can You Save Irina?

Regrettably, there isn’t any way to do this. Irina will always end up dead once you deliver this letter. The tragedy continues, as Edgar will return in the form of a maddened Invader called Edgar the Revenger at the Revenger’s Shack in Western Liurnia. You will have no choice but to kill him. Doing this will get you his Banished Knight’s Halberd +8, as well as a Shabriri Grape, a key item you need for Hyetta the Blind Maiden’s quest.