Elden Ring’s Diallos NPC will ask you to look for his missing loyal servant Lanya. And you’ll find out soon enough where is Lanya, but news will be dire. Upon learning about Lanya’s fate, Diallos will ask you to find the culprits. To find a recusant hideout location, you’ll need to follow the “old road west from the town of windmills.” Diallos says we need to seek the manor on the peak of Mt. Gelmir. In this guide, we’ll explain to you step-by-step how to complete the Lanya & Diallos quest in Elden Ring. 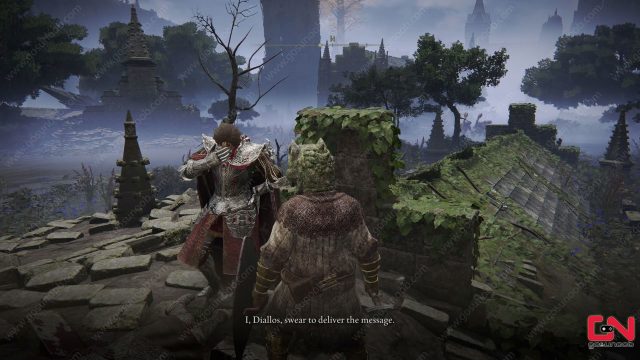 Where to Find Lanya in Elden Ring

You’ll learn about Lanya when you meet Diallos for the first time at the Roundtable Hold. Diallos will tell you about Lanya’s mischievous nature and how she often disappears. She’s missing again and Diallos will kindly ask you to inform him about Lanya’s whereabouts if you find Lanya during your journey in the Lands Between. Eventually, you’ll find Lanya near the site of grace called Academy Gate Town, among sunken houses in the nearby swamp area in Liurnia. Check out our “Where is Lanya” guide for more details. Diallos will be there as well, as he has found her first. Unfortunately, he will find her dead body. Someone has killed Lanya, and Diallos wants revenge – “The tale of House Hoslow is told in blood!”

Next time you return to the Roundtable Hold, speak with Diallos again. He’ll talk about “recusants” who have invited him to join them. Apparently, they are the ones who have killed Lanya. Despite sounding exasperated, he claims that he has accepted their offer. But who are they? Diallos says that the location of the recusant hideout is on Mt. Gelmir. In order to find this manor on the peak of Mt. Gelmir, we need to follow the “old road that leads west from the town of windmills.”

Where to find Manor on the Peak, West from the Town of Windmills on Mt. Gelmir in Elden Ring

Up to this point, you’ve probably been familiar with the Lanya & Diallos story, but from here, we need to warn you – SPOILERS AHEAD! The manor on the peak of Mt. Gelmir Diallos is talking about is the Volcano Manor. The Volcano Manor is one of the major dungeons situated on Mount Gelmir. There, you’ll meet Tanith, the leader of the Volcano Manor, and if you join them, you be presented with a slew of new quests, NPCs, and options to invade other players.

Climbing Mount Gelmir in Elden Ring is neither easy nor perfectly clear how to do it, but using the cliffside paths from Altus Plateau is one of the ways to do it. Alternatively, there’s a shortcut via the Academy of Raya Lucaria. If you get killed by Abductor Virgins there, you’ll end up in the Volcano Manor basement. Admittedly, this is a simplified explanation of how to climb Mount Gelmir and reach Volcano Manor, but at this point of the game, you’re still far away from that part of the story. Check out how to reach the Volcano Manor in our dedicated guide.

When you finally reach manor on the peak of Mt. Gelmir in Elden Ring, which we now know is the Volcano Manor, make sure to join them. You’ll receive the Drawing Room Key. Head there, and surprise, surprise, our friend Diallos is there. Diallos has had a change of heart, and now he thinks that revenge is not the answer. Rather, he has decided to join the Volcano Manor instead. He still mourns Layna, but now he wants to become a champion.

Unfortunately for him, it will turn out he doesn’t have “stuff of champions” as he has claimed. The next time you meet him, after you kill Old Knight Istvan, he’ll complain about his lack of accomplishments. He’ll regret his decision to abandon the path of revenge and self-pity himself.

NEXT POSTElden Ring Statue with Glowing Crack in Stormveil Castle