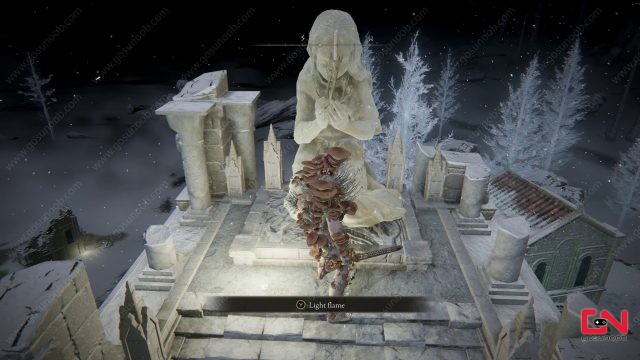 In Ordina, Liturgical Town, you’ll come across a sealed passage. And in order to pass it, you’ll need to light the four figures in the Evergaol. Enter the Evergoal by stepping on the circle left of the statue with a message. Once inside, we will need to find the Four Figures and interact with them in order to light them. Just beware of invisible enemies. The first one is the only one that’s located on the ground level. Head left from the square where you spawned until you reach the first figure, seen in the image below.

For the next three figures, you’ll need to climb ladders to the roofs. One ladder is located on the outer wall of the westernmost edge of the Evergaol. Check out the images below for the exact location. Head there, climb to the top of the tower and light a figure on the top.

Now get down and head back to where you came from. The next ladder is rigth of the staircase from where you came. You’ll need to go around the building and then use the ladder to climb the next tower. Climb all the way to the top and you’ll find the third Evergaol figure there. Check out the images below for the exact location.