The Elden Ring talking Jellyfish puzzle is something you’ll encounter in later phases of the game. The puzzle is related to Stargazers’ Ruins sealed door, which is guarded by the said jellyfish, and players are not sure what they need to do in order to break the seal. Stargazers’ Ruins are located in the Mountaintops of the Giants region, which is deep into the late game and it requires you to have the Haligtree Secret Medallion in order to reach it via the Lift of Rold. Here’s how to break the Stargazers’ Ruins seal and help the talking Jellyfish to find her Sister. 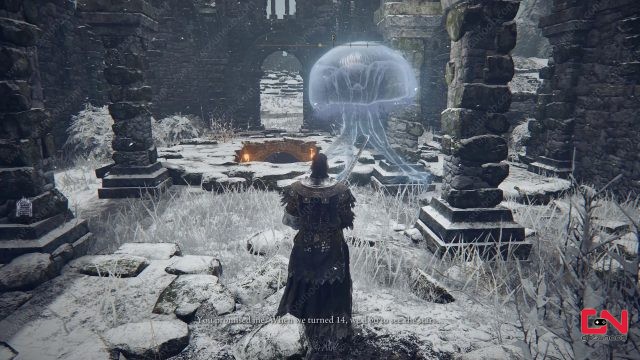 Players will encounter the talking Jellyfish at the Stargazers’ Ruins location. The ruins are best reached from the Snow Valley Ruins Overlook site of grace. From there, just follow the path to the west alongside the gorge until you reach a bridge. Be careful when you approach the bridge, because a giant phantom skeleton will emerge from the ground. Cross that bridge, turn imminently left, and soon after you’ll reach Stargazers’ Ruins and the talking Jellyfish who is looking for her sister.

The Jellyfish will repeat the same line over and over again – “Sister… Where did you Go?” The talking Jellyfish essentially guards the sealed door behind her. In order to break the sealed door, you’ll need to help the Jellyfish to find her sister. And achieving this is rather easy, all you need to do is to summon Spirit Jellyfish Ashes. The Jellyfish summon is the first summon you’ll receive in the game, so you almost certainly have it by this point. Just summon your Jellyfish in front of Stargazers’ Ruins Jellyfish, and she’ll recognize her sister.

The talking Jellyfish will be happy to see her sister, and they will disappear to “see the stars”. This will remove the Jellyfish from guarding the door, you’ll receive the “Fancy Spin” gesture, and the seal will be broken. Inside, you’ll find the Primal Glintstone Blade talisman as a reward. The Primal Glintstone Blade is an excellent option for mage builds, as it reduces FP consumption of sorcerous and incantations, but it will also reduce your max HP.

PREVIOUS POSTBrawlhalla Legends That Have Traveled to Outer Space