In a new post on their official blog, Bethesda have published a batch of screenshots from Automatron, the first piece of DLC for Fallout 4. It’s a robot-oriented expansion, with new quests, items and robot companions to customize. 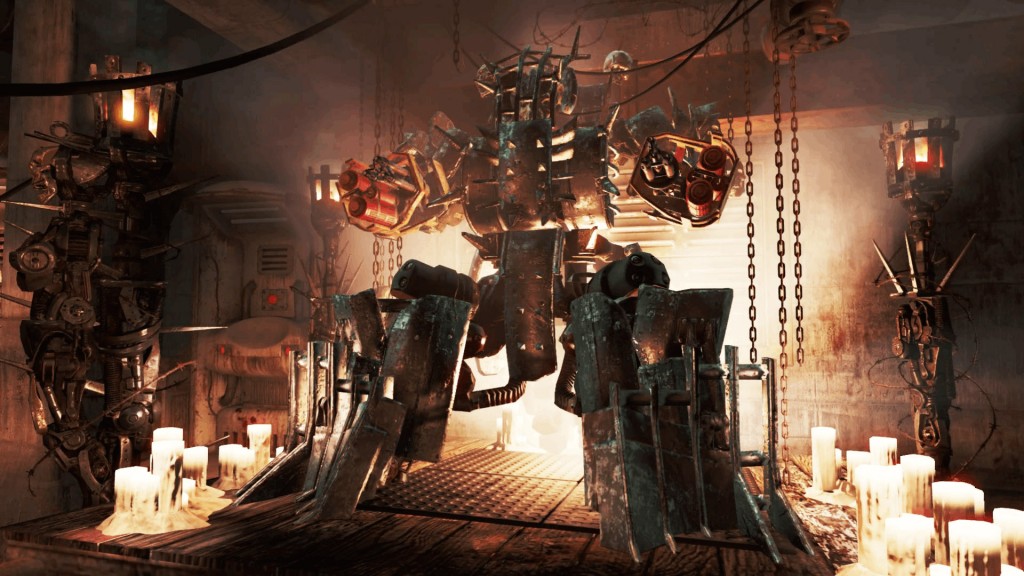 The screenshots are high-quality caps from the trailer that was released recently. There are only five of them, but they show off some of the stuff you might have missed while watching the video, parts that had little screen time.

For example, the big robot in what seems to be a shrine, pictured above. It has a pretty cult-y feel, what with all the skulls around the place and the soft candlelight. Will there be some kind of robot-worshipping cult? Or a cult with robots as followers? There’s no way to tell, yet.

The other images are somewhat less ominous. There’s a picture of two robots duking it out, using buzzsaws and laser eyes. Another one shows a new energy weapon, which kinda looks like the head of the robot with the laser eyes. The armor on that one looks interesting as well – like a mix of regular and power armor. It looks like steel plate, but is worn over the vault jumpsuit. The robot crafting and customization station is pretty self-explanatory. The final image looks like the robot from the shrine in action. It’s nice to know we can adorn our bots with human skulls.

Automatron is set to launch on March 22nd, across all three platforms. If you’ve bought the season pass, it will be added to your library automatically. Those who want to buy it separately from the rest will have to wait for launch day – the price is still unknown, and there’s no way to preorder it without the rest.