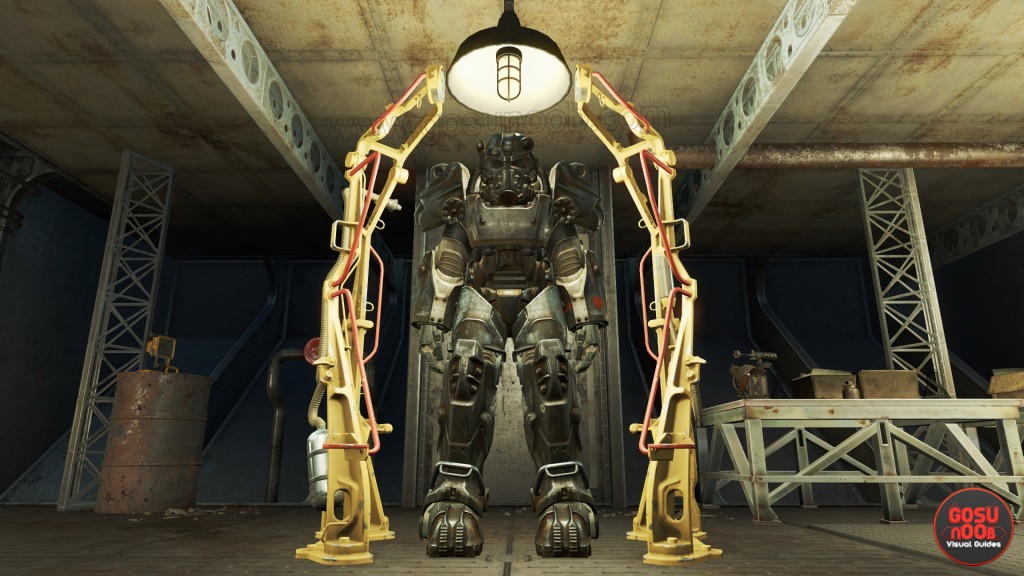 There are two factions using this model – the Brotherhood of Steel and the Atom Cats. You can get the power armor from them by buying it, stealing it or even for free, if you do them enough favors.

When you’ve progressed enough through the main story, Brotherhood aircraft will start appearing. If you join them, you’ll get a T-60 for free after a while (when you get knighted) – available for pick-up on their zeppelin. Even if you don’t join, you can buy parts from Proctor Teagan, who is aboard the skyship as well.

The Atom Cats are at the Atom Cats Garage from the start, but they’ll want some favors done before their shopkeeper, Rowdy, decides to let you browse her power armor pieces. If you’re not interested in having a good relationship with the gang, you could always steal what you need.

Most of a T-60 set can be found in Fiddler’s Green Trailer Park (thanks to Liam for the tip). Go to the office building under the sign, and either hack the terminal or pick the lock on the safe to get the trailer key. Look for the yellow trailer with an orange line north of the office. The armor is inside, but you’ll have to be over a certain level, or you’ll get the T-51 instead.

The T-60 is a direct upgrade from the T-51 – there’s literally no reason not to go for it, unless you dislike the appearance for some reason. Here’s what the stats look like:

NEXT POSTHow to Find Companion in Settlement | Fallout 4