Shrines of Depths are locations you can visit in Genshin Impact. These treasure troves contain luxurious chests, which reward whoever opens them with primogems, weapons, artifacts and sigils. They can be found all over Mondstadt and Liyue, but the problem is that they’re locked. In order to open them, you’ll need special keys. This guide will show you all Genshin Impact Shrine of Depths locations and how to get keys that unlock them.

There are thirteen Shrines of Depths in the verdant meadows and rocky cliffs of Mondstadt. While some are scattered along the north and south edges of the area, most are concentrated in the narrow strip of land between the city of Mondstadt to the north and the snow-covered mountains to the south. 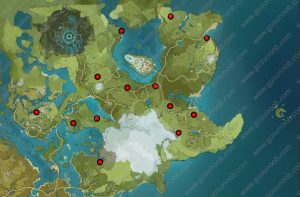 There are only seven Shrines of Depths in Liyue, and three of those are huddled together in the northwestern region, near the border. Three more are scattered around the continent, while the last one is on an island in the eastern archipelago. There’s a lot of ground to cover here, and not many shrines, so we suggest you plunder the ones in Mondstadt first. 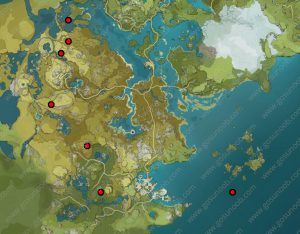 How to unlock Shrine of Depths

Certain quests can also reward you with Shrine of Depths keys, quests like The Chi of Guyun, New Horizons of Adventure, Treasure Lost, Treasure Found, and The Tree Who Stands Alone. You can get one by upgrading the Mondstadt Statues of The Seven to level 6.