Buddy Quiet is one of the companions in Metal Gear Solid 5: The Phantom Pain. As with other buddies, she can be taken to missions, where she helps with her unique skill set. She also has a storyline of her own, which can be explored during the events of the game. In this guide, we’re going to tell you everything about Quiet, her backstory, abilities and how to take advantage of them in combat.


Some of the information in this guide hasn’t been confirmed yet. We’ll update it with fresh data as soon as the game’s out.

How To Use Quiet

When you open the map on your iDroid, use the up button on the D-Pad to find the options “Quiet (Scout)” and “Quiet (Attack)”. When you select the option, you have to choose the specific sniper spot where you want her. She’ll then go there and do her thing.

To command her on the field, use the L1 (LB on Xbox) button to bring up the menu with the commands, choose what you want with the right analog stick, then press the stick to confirm your choice.

Quiet is a mutant – she was experimented upon with a virus that gave her supernatural abilities in the attempt to engineer the perfect soldier. She first appears at the very beginning of the game’s story, as an assassin trying to kill Big Boss/Venom Snake.

She fails and is later (during Mission 11: Cloaked in Silence) captured by the Diamond Dogs and taken to Mother Base. Once they arrive, Miller suggests she should be executed – he feels she’s a considerable threat, going after Big Boss and now knowing the location of their headquarters. Boss disagrees, though, and decides to keep her onboard.

She leaves the player’s side at one moment, but there’s a way to stop her from leaving (spoilers ahead). 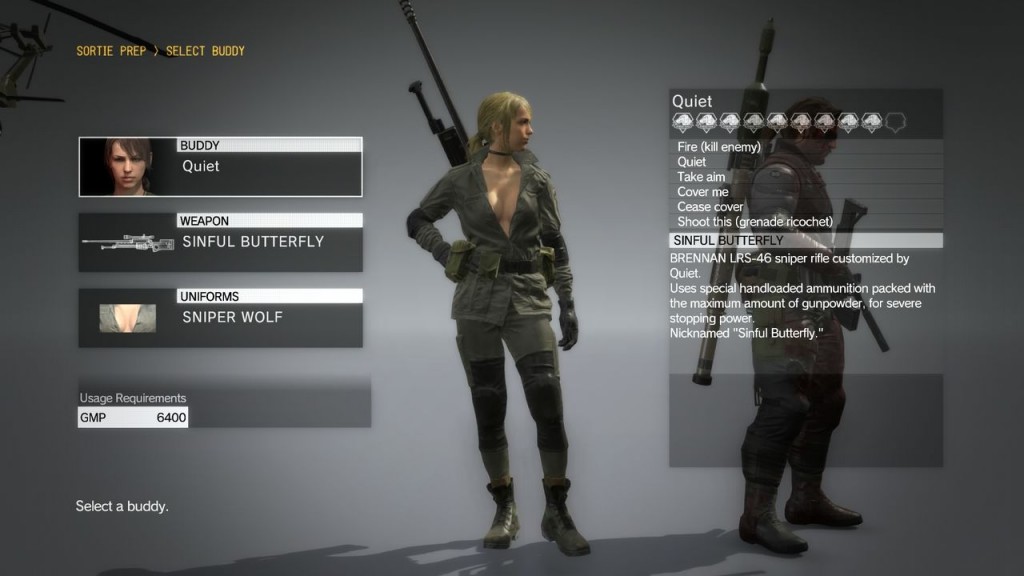 There are different costumes / uniforms for her as well, even though most people will probably have her wearing the costume seen in the trailers.

Quiet is a sniper. She can turn invisible, and moves extremely fast, leaving only a cloud of dust in her wake. Her hearing is augmented – she can hear ten times better than normal humans. Her vision is enhanced as well – low-light conditions don’t bother her, so her sight is unchanged during night time.

On the other hand, water is a weakness of hers. The parasites inside her react to it, which makes her unable to focus and affects her powers. She reacts to rain (something to watch out, since the weather is dynamic), and there’s supposedly a water pistol you can squirt her with, for some reason.

One of her basic abilities is scouting – she can recon an area, marking a handful of enemies on the radar. She can either follow you around, or hang tight in designated sniper spots, waiting for your instructions. When nested, a line of green laser will indicated her sightline, showing you where she’s looking at the moment.

Here a full list of commands (some won’t be available until you raise your bond level):

Quiet carries a sniper rifle to battle. There’s several of them available throughout the game, and you’ll have to either develop them at Mother Base or acquire them on the field. She’ll customize and name each one herself. Some examples include Wicked Butterfly (Renov ICKX with a laser sight) and Sinful Butterfly (Brennan LRS-46 with special, handloaded ammo). Before a mission starts, you can choose to order her to use tranquilizer darts instead of bullets, if you’re going for the non-lethal approach.

NEXT POSTHow To Make GMP Money In MGSV: The Phantom Pain