The latest Witcher 3 patch 1.21 comes with a handful of changes which include improvements to Crafting panel, redesign of Repair panel, improvements to region maps by adding pin filtering, more intuitive quest tracking, and a region overview for faster navigation. The most important improvement for Gwent players is a new book titled ‘A Miraculous Guide to Gwent‘ which displays number of Gwent cards missing from player’s base – game collection and information on where to find them. Collecting all Gwent cards unlocks achievement titled Collect ‘Em All. 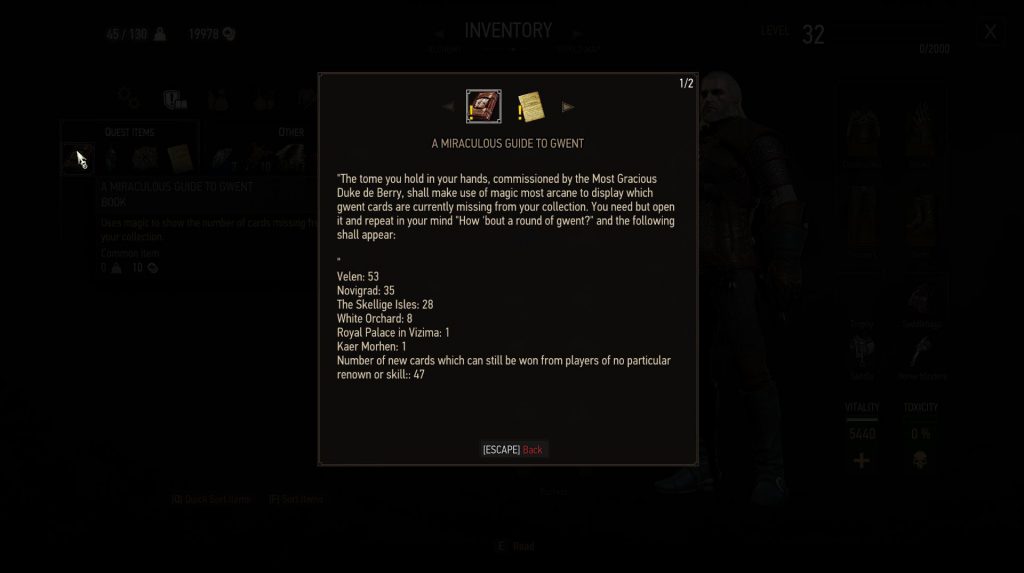 Quest titled Collect ‘Em All will be stuck on your screen and marked as failed in your quest log, if player does not succeed in collecting Milva, Vampire Bruxa and Dandelion Gwent cards during Gwent tournament in quest titled A Matter of Life and Death.

Where to collect A Miraculous Guide to Gwent

A Miraculous Guide to Gwent book can be obtained either from Gwent playing scholar in Prologue or from merchant near St. Gregory’s Bridge in Gildorf district of Novigrad. Once you collect the book simply open your inventory and double-click it. You’ll see a list of areas where you can obtain cards. It won’t tell you the precise places you have to visit in order to get them, but it will at least let you narrow your search.

NEXT POSTErrors & Problems in Blood and Wine Patch 1.21 | Witcher 3