Cat School Gear is another witcher armor set that you can acquire through crafting. The diagrams needed for crafting this particular gear set are found in the Novigrad district.
▼Article Continues Below▼
This set is also called Feline, as all the items carry that name. It contains seven (7) elements. These diagrams represent the armor and weapons of a legendary witcher named Kiyan. In the guide bellow we show you their exact locations, materials needed for crafting and stats.

We have also prepared for you the following guides: UPDATE: A lot has changed with update 1.07. Various weapon and armor requirements were raised, including those for the Cat Gear. We’ve updated the guide with new data, so if the game shows you different level requirements, you’re almost certainly playing an older version.

Find the diagrams for all the elements of Cat School witcher gear.

Feline diagrams are hidden in four locations. Three of these locations hide three (3) diagrams, while the last the remaining four (4). As you collect each diagram you’ll find a book or a letter that reveals the location of the rest of the Cat School gear. Collecting and equipping all elements of one set of witcher gear will give you the achievement Armed and Dangerous.

Important Note: Four of the diagrams are found within a cave in northern Novigrad. In order to enter this cave, you need an item called The Eye of Nehaleni. This item is given to you by Keira Metz at the end of the main quest “Wandering in the Dark”, which is a follow up to the quest “Hunting a Witch”.

The diagram for this weapon is found within the ruins of Est Tayiar. These ruins are located in the eastern Novigrad region, northeast of Oxenfurt. There is a hole in the ground where you can jump down. Use the Aard sign on the wall to your right to reveal a hidden room. Loot the items from the corpse. By reading Professor Sigismund Gloger’s notes found there, you’ll reveal the next Feline Diagram location.

To find the Feline steel sword diagram, head south from Novigrad, to the Drahim Castle fast travel point. Enter the stone tower and head for the basement. The diagram and another location clue ar at the bottom level.

Head toward the lonely island southwest of Novigrad. There is a sunken ship at this location. Head below deck and loot the chest just next to the wooden stairs.

You’ll have to work a lot more for these diagrams. Don’t even bother coming here if you haven’t completed the main story quest “Wandering in the Dark”. The item obtained at the end of this quest unlocks the cave entrance.

The cave entrance you want to aim for is found in the northwestern part of Novigrad. There is a hidden path you have to jump on, which takes you to the cave. Open the entrance and keep to your left. Keep going to your left.Eventually, you’ll end up inside a small room with lots of statues. Use the switch found near each of these statues to make them face the center of the room. This action reveals a hidden underground entrance in the middle of the room. Jump into the water and head to the bottom. There is a body with the Laboratory Key on it.Leave this room and go back. Keep to your left side once again. Soon enough, you should reach the closed Laboratory door. Unlock it and head to the enemy called Mad Kiyan, the original owner of the armor set… He is level 17 and likes to parry your attacks, while maintaining Quen shields from time to time. Use the Aard sign and attack him while he is disoriented. Once you kill him, he’ll drop the rest of the Diagrams as well as Moonblade (a relic silver sword).

All items are intended for level 17 characters, except for the crossbow (29). This light armor set increases Armor and Stamina regeneration. Beside the regular stats, there are a couple that stand out. Each part of the set gives plus 5% on attack power. The silver sword gives plus 12% on Aard Sign intensity. In the picture below you can check out all of their stats. 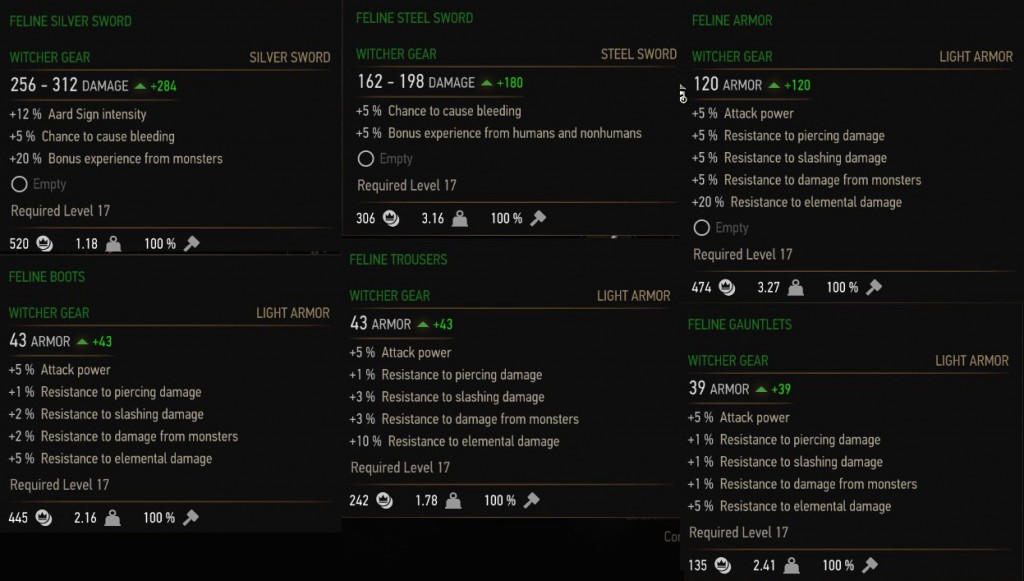 Materials needed for crafting the Feline Cat gear are as follows:

Most of the required materials can be obtained by dismantling stuff. Once you collect all materials, go to any Blacksmith and Armorer Journeyman. Two of them are located in Novigrad, next to the Hierarch Square fast travel point.