Adze is one of the members of the Order of The Ancients in Assassin’s Creed Valhalla. They’re a Warden of Law, and one of the first ones you’ll have to deal with. Getting the second clue is no trouble at all, but the third and final one is a bit tough – the game points you towards a watermill, but that’s not all there is to it. If you’re struggling with it, this guide will show you AC Valhalla Adze third clue location.

The first clue is clear – defeat the drinking champion found in the Roman ruins within Ledecestre town in Ledecestrescire. All you have to do is head on over to Ledecestre and look for a map icon of two crossed horns. Go there and complete the drinking mini-game. When you win, your opponent is going to give you the second clue.

This is where the trouble starts. The second clue tells you to investigate the watermill just south of Tonnastadir hamlet in western Ledecesterscire. It’s technically correct – you do need to find the watermill to find the clue, it’s just that the clue isn’t at the watermill.

Go to Tonnastadir, then follow the road south, past Lyftmere’s Pond. Keep going until you reach the watermill. You can’t miss it – it’s by the road, and it’s pretty massive. 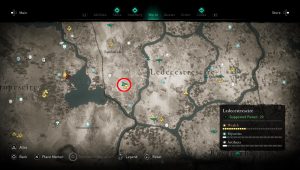 Once you’re standing next to it, head northwest. There’s a house up the hill there. Enter it and head right. The third clue will be on the pile of rugs in the corner.

Finding it will reveal the Adze’s identity and location. She’s one of the easiest members of the Order you’ll deal with – you won’t have to fight dozens of guards, and you can sneak up to her quickly and easily.