Derelict Shrine of Camulus is a location in Assassin’s Creed Valhalla. It’s a temple that’s long been in disuse, hidden in the forests of Oxenefordscire. There’s a locked chest there, with a nickel ingot inside. Since ingots are always in short supply, you’ll want to open it, but you’ll need to find two keys first. If you’re having trouble with that, our AC Valhalla Derelict Shrine of Camulus guide will show you where to find chesrt keys.

To get the first key, you’ll need to head north from the shrine. You’ll find an ancient stone buidling in the forest. Climb up to the roof, and use a red clay pot to blow a hole in it. Drop down, and use Odin’s sight to locate the key.

The second key is closer to the chest. It’s up on one of the tall stone pillars at the shrine itself. Look up and let an Odin’s sight pusle to discover which one exactly. Now you just have to wait half an hour until Eivor manages to scale it. 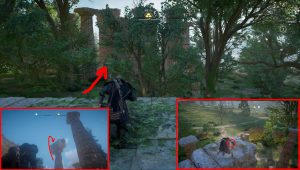 Once you have both keys, run back to the chest and open it up. You’ll get a nickel ingot. It might feel like a small reward for the amount of work you put in – maybe you’d like an armor piece more – but it’s a valuable find. Upgrading all your weapons and armor pieces takes a lot of resources, and the ingots are particularly hard to come by.

It’s not unusual for these things to be complicated. There can be lockes on the chest, barred doors, and a multitude of other obstacles. Some even can’t be accessed before a certain point in the story. The worst of them all is Asgard, with a dizzying 30 Ymir’s Tear Stones, which don’t even reward you with something nice once you collect them all.