River Exe treasure locations in AC Valhalla include two places with armor pieces reportedly belonging to saint George. You can get them during the river raid on Exe, but since you start off with only a bit of space in your longship, knowing where to look will save you a lot of trouble. In this guide, we’re going to show you where to find AC Valhalla river Exe treasure locations, so you can complete the Saint George’s armor set as soon as possible.

The locations are random, which means you won’t get the items in the same place we did. There are some rules, though, and we’ll tell you where we got them. The armor pieces spawn only in military locations. On the river Exe map, this includes: 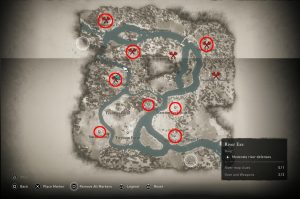 We got the cape from the Fortress on Exe, the big castle in the northwestern corner of the map. There are several chests in this location, and any one of them can hold a gear piece. Two are in the castle itself, while one is in the pig sty.

We found the shield in the Eastern Fortification, the first military camp you’ll find while going upstream from the starting position. Remember to use Odin’s sight to reveal the locations of the chests and save some time. It’s especially important in the later stages of a raid, when your comrades start burning houses and the smoke prevents you from seeing much.

Since the locations aren’t set in stone, and you can only raid so much before you ship is full and you can’t open any more chests, we suggest you try to expand your cargo hold as soon as possible.