There’s an Anglo Saxon woman in Grantebridge that’ll start shouting “Shoo! Shoo!” at you if you approach her. She can be found in the fields behind the city, and she’s affraid you’re there to hurt her cats. Her house is locked, but there’s a way to get the key without resorting to violence. Our AC Valhalla shoo shoo Anglo Saxon woman guide will show you how.

Where to find key and open the locked door?

In order to get the key and open the door to the house of cats, all you need to do is go down the road a dozen steps and talk to the farmer in the field. He’ll tell you he has a terrible rat problem, and he’s tried everything that came to mind. Eivor will offer to help him – simply turn around and go back to the cat lady. She’ll talk to you now. 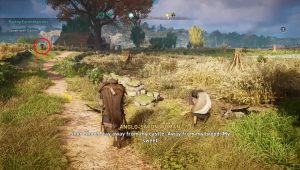 You’ll need at least two charisma to butter her up. If you have it, Eivor will tell her about Freya and her cats, and how they’re alike. The woman will be happy to give you the key so you can check out her shrine. Once you open the door, the cats will spill out and into the fields.

Talk to the farmer again, and he’ll be so grateful you’ve solved his rat problem that he’ll give you the key to his house as well. Trusting folk, these Grantebridgians. Head into his home and you’ll find a chest with some silver and 100 supplies in it. A fair day’s work for a fair day’s pay. It’s the cats who did most of the work, but let’s not dwell on the details now. Somemone had to broker the arrangement, obviously. The cats got their rats.