Treasure of River Severn is a new quest in AC Valhalla. It was added in the river raids update, and it tasks you with finding several armor pieces from the Saint George set on the river Severn map. It’s a big map with lots of places to raid, each with a number of chests to open. Since your raiders can only open so many chests before their pockets are full, you’ll have to return there a lot in order to check everything out. Our AC Valhalla Treasure of River Severn armor locations guide will try to save you some time.

The armor pieces will show up in random locations, so you’ll have to do a bit of searching either way. They’re not completely random, though, so we’ll help you narrow down the search as much as we can. The gear only appears in military locations, which includes: 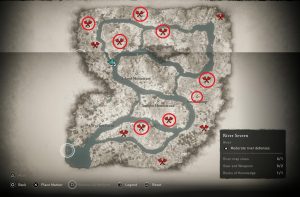 We found Saint George’s bracers in the Severn Outpost, in the northwestern corner of the map. There are several chests in this area, so make sure you use Odin’s sight to pinpoint their locations. There’s no guarantee they’ll be here for you as well, since their location is random.

For us, Saint George’s trousers appeared in a chest in the Island Camp. You’ll have to clear the area and look around a bit in order to find the chest. Since the gear is placed in a random chest, you might not get it here, but it’s a good place to start.

Thanks to the random nature of the river raids, you’ll have to open quite a few chests before you get the armor pieces. We suggest you upgrade the cargo hold of your ship as soon as possible – this will allow you to open more chests per outing.