In AC Valhalla’s new DLC – Siege of Paris, you can come into the possession of a Map to Thieves Camp which holds the location of the powerful Ulfberht Sword. This blade is tempered from crucible steel, so getting your hands on it is definitely worth it. However, it is very well hidden, and to be able to find it, you will first need to complete several steps which will lead you to it. If you want to get to it as quickly as possible, our Ulfberht Sword Location – AC Valhalla Map to Thieves Camp guide will tell you exactly what you need to do and where you need to go. 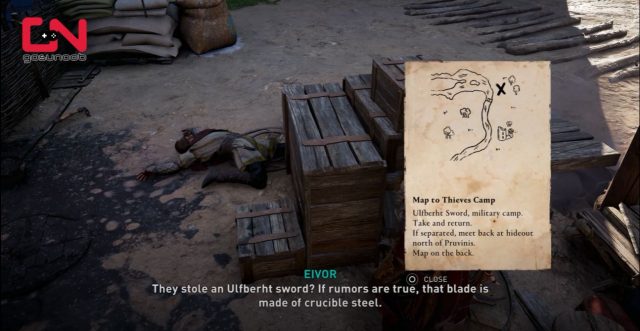 How to Get Ulfberht Sword AC Valhalla

The road to acquiring this sword starts at Melunois, or more specifically, at Fort Pruvinis. Once here, locate the desk shown in the video below and you will find a letter and a map. The letter reads: “Ulfberht Sword, Military camp. Take and return. If separated, meet back at hideout north of Pruvinis. Map on the back.” So, going by the this message and the map, you can put the two clues together and figure out that the sword is in Bilhaut. Go there.

After you arrive at this location, you will see a Norse Man near a waterfall, several bodies around him. Approach him and start a conversation. It will turn out that he has killed his kinsmen in order to have the sword all for himself. You will have three options here: to Intimidate him (“Give me the sword, or else.”), to buy the sword (“I’ll buy the sword. (3000)”), or to fight him for it (“I will fight you for the sword.”). Naturally, the intimidation option is the easiest way to get the Ulfberht Sword. In any case, once it is done, you will have this sword in your possession. A flawless short sword, it is called Egbert. You can see its exact stats in our video down below.