Crimson Radio is one of the crew challenges in Borderlands 3. These tasks come from Mad Moxxi – she wants you to find and sabotage COV radio broadcast towers, so she can push out Crimson Alliance propaganda into the ether. The sabotage part is just walking up to a computer and interacting with it. There’s usually no more than one per map, but they can be hard to spot. If you have trouble finding them, this guide will show you all Borderlands 3 Crimson Radio locations, to help you complete the crew challenges.

The radio tower in Ascension Bluff is in the southwest of the map, east of the base. As you follow the road away from the base, you’ll see the big power tower on the left. Approach it and climb up to the upper level. There’s a big container right next to the ladder. Climb on top of it, and you’ll find the terminal. Interact with it in order to sabotage it.

The Meridian Outskirts radio tower is in the far east of the map. You’ll find it in the middle of the sludge-filled arena with the high rise in the background. There’s a stack of containers with an antenna on top. You should climb up, and you’ll find the terminal next to a big, booming speaker.

Go to the west side of the central square and climb up the stairs near the 24h diner (the one with the purple sign). Go around the building and use the crate to jump onto the balcony across the road. You’ll find the dish there.

You’ll find this broadcast tower in the Big Dock Energy area. It’s on the roof of a building – in order to get there, you’ll have to climb up to the roof a nearby building, then jump on top of a light pole, then across the street and onto the roof where the antenna is.

Athenas Crimson Radio – where to find

The antenna in Atheans is in Anchorhold, the southern are of the map. As you cross the bridge from the north, look up and you’ll see it at the top of the tower. Climb the tiny building with the speaker, on the right, and follow the path up until you reach the broadcast tower.

The tower in Atlas HQ is in the southeastern corner of the map. If you go to the helipad at the bottom of the map and turn left, you’ll see it on a ledge below the balcony.

The first one is in the courtyard in Shankland, the open area in the north. It’s on the top of the pile of containers, so you’ll have to jump and climb a bit. 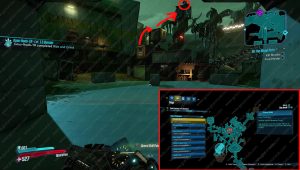 The second tower is in the northeast corner of the map, in the courtyard in front of Ultramax Spire. As you enter the courtyard, look up and to the right. You’ll see the antenna on the roof. Use the pipes on the side of the building to climb up.

You’ll find the broadcast tower in Floodmoor in the east of the area, in the swamp east of the village. It’s on a platform built into one of the pillars supporting the crane. 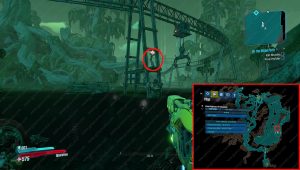 You’ll find this one in the Leery Hamlet, the ramshackle village in the south of the map. It’s on the roof of one of the taller houses. You’ll have to get inside, climb to the top floor, then use the balcony to continue your ascent. 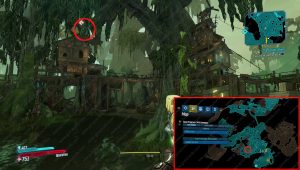 The first broadcast tower in the region is at Soggybog Rigs, in the northwest of the map. It’s on a terrace high up on one of the barn-like buidlings. To start the climb, you’ll have to go further northeast. Once you reach the place marked on the map, use the rocks to get up to the roof. Follow the path, cross the pipes and jump onto the roof that houses the antenna.

The second one is at Tig’s Big Rig, in the southwest. To begin the ascent, you’ll have to go a bit more to the south. Climb the ladder and follow the path until you get to the speaker. Look up and you’ll see a platform on the right. Gently jump up onto the pipe, then the terrace.

The first tower in the area is at the factory in the north. It might look like it would be a good idea to use the main entrance, in the northwest, but it’s actually best to approach it from the hills in the south. Once you get to the stairs, climb all the way to the top. You’ll see the antenna on the platform below.

The second one is on the eastern edge of the map, north from the fast travel point. You’ll notice the phallic-shaped building from the distance. Go inside, then out onto the terrace. Look over the railing and you’ll notice the radio tower on a platform.

The Splinterlands tower is near the north edge of the map. It’s on the south side of the camp, on a building next to the big power tower.

The tower in Carnivora is at the entrance to the settlement in the east. You’ll find it a bit north from the gates, and you’ll have to go through the open container to reach it.

Go to Last-Stand Yard, the vast area in the middle of the map. Head to the western edge of the area, and follow the broken railway bridge to the edge. You’ll see the antenna on the other part of the bridge, and you’ll have to jump onto it. Try to grab it from the side – jumping onto it from the front may cause you to slide down.

Follow the desert road south of the stronghold. The antenna will be on a platform on the side of the big concrete pillar. Use the containers to climb up to the first platform, then go up the ladder, jump around the corner (carefully) onto the steel beams, then onto the pipe and up to the final platform.

The first one’s in the northeastern corner of the central valley. It’s on top of a structure that’s being swallowed by red growth. Use the boxes and containers to get up there.

The second one is in the courtyard in the southeastern corner of the map, the one with big, sharp stone objects.

You’ll find it at the end of the western corridor. There’s a Maliwan building with a force field there, and the broadcast tower is on top of it. You should go around from the right, then jump across the concrete bars and slabs until you reach the roof.

PREVIOUS POSTBorderlands 3 From the Ground Up Watch Monitor Bug Solution