Dead Claptraps are a kind of crew challenge in Borderlands 3. They’re collectibles strewn across the worlds – all you need to do is find them. You’ll be scavenging the dead robots in order to help your own claptrap make itself a companion. Each locations will be marked on the map when you get near it, and you can check how many there are in each area through the crew challenges menu. If you’re wondering where to find claptrap parts, keep reading our Borderlands 3 Dead Claptrap locations guide.

The first one we found in the The Droughts was used for its Gyroscopic Rotor. You can find it in the southeastern corner of the map, at the junkyard arena. Go around the big wall of wrecks and you’ll find the little robot hanging by its wheel. Claptrap will comment something about it being used as a pinata. When you salvage the parts, you’ll get 10 Eridium, $30 and 200 XP.

The one in Ascension Bluff is needed for its Supermax Deluxe 3D Surround Sound System. You’ll find it in the east, as soon as you enter the Holy Broadcast Center compound. It’s tied to a street light on the right, next to a container. It’s high up on the pole, so you’ll have to go behind the container and use the wrecks to get on top of it.

The claptrap part in this area is in the south of the map. Head south from the base and go into the cave under the bridge. After you clear out the ratch infestation, you’ll find the claptrap with the Universal Translator in one of the nests.

You’ll be searching for a Stair-Climbing Update this time. The dead claptrap in the Metroplex is in a tunnel in the middle of the city. If you enter it from the south, you’ll see a door on the left after the bend. Go inside and up the stairs, and you’ll find the robot in a puddle of oil.

The first claptrap in Lectra City will give you an Eye Rotor. You’ll find it in the east, on the edge of the map. You’ll need to do some parkour in order to reach it, using a container and some eaves.

The second one is in the middle of the map. You can get an 8th Generation Emotive Resonator from it. To get it, you’ll have to go to Downtown Square and follow the stairs underground. You’ll find it in one of the corners of the underground plaza, next to some crates and a purple billboard.

The first one in Athenas will drop the Poetry Module. You’ll find it in the west of the northern part of the map. It’s on a bench in front of a lone building sitting atop a mesa. You’ll cross a wooden bridge to get to it.

The second dead claptrap contains the Singing Module. It is located in the southern part of the map, on top of a pink building. You’ll find it next to a piano – it isn’t visible from the ground, but once you’re up on its level, you won’t be able to miss it.

The first claptrap in Skywell will give you a Dubstep Library. You’ll find it in the northwestern part of the lower level. When you walk into the room marked on the map, look up and to the left. You’ll see a ledge with a red glow. Jump up there, and you’ll find the robot.

The next one has the Antenna, and is hidden away in the northern part of the upper level. When you reach a bridge crossing a small valley, look at the rock outcrop next to it – you’ll see the claptrap on top of it, tied to a pole. Climb the hill on the left and jump across the gap to get to it.

Atlas HQ Dead Claptrap – how to get

You’ll find the robot with the Claptrap-VPN in the bar in the main hall of Atlas HQ. It’s on the upper floor, on the western side. The wreckage is behind the counter.

The robot in this area will give you the Antenna Accessory. You’ll find it in the northwestern corner of the map, at the Green Diamond Platform. It will be on the train tracks. 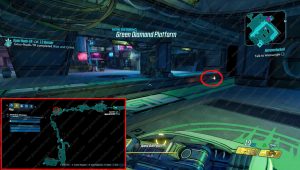 The first claptrap in the Anvil is near the prison entrance. As you enter, turn left and go into the adjoining room. You’ll find the robot under a burst pipe. It’ll give you a Paint Job.

The second one is in the northwestern part of the complex. It is tied to the table in a small room. When you loot it, you’ll get a Hairpiece. 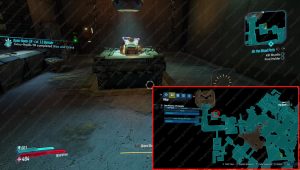 The first one is in the northern part of the map. You’ll find it lodged between the roots of a giant tree, near a run-down shack. You’ll get a Reinforced Rear Plate from it.

The next one is in the northeast. You’ll find it in the crawlspace under a big wooden building, having relations with a generator. It’ll drop the “Love” Module.

There’s only one dead claptrap in the Estate, and it can be found in the Grotto under the mansion. You’ll find it on the left side, near the tunnel from which a giant Tyrant emerges. Loot it to get a Multi-Tasking Modifier.

This one will give you the Dance Protocol Driver. You’ll find it behind the waterfall in the north of the map. Follow the cave to the end, then look up. You’ll see the robot on a ledge.

The first claptrap in Ambermire is in the northeast. You’ll find it in front of the fungal house, trapped in the fungus. It drops Long Longe Term Memory.

The second one is in the southwest, among the parts of the wrecked spaceship, next to the big tree. It’ll provide you with a Hard Disk Slot.

The only dead claptrap in the cellar is near the entrance to the area. When you enter the first big room, go down the stairs on the right and look for it under the wooden platform. You’ll get an Antenna Accessory. 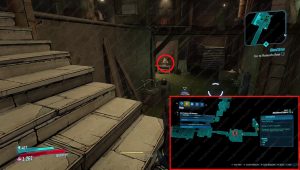 The dead claptrap in Devil’s Razor is in the Sin-A-Plex, an enemy camp a bit north of the middle of the map. Look for a big Dahl warehouse, and an open container to the left of the entrance. Go inside and crawl to get the All-Terrain Motor.

The one in this area is in the east, in front of the amusement part north of the settlement. You’ll find it stuck in a tire near the entrance. It’ll give you a Wheel.

Carnivora Dead Claptrap – where to find

The one in Carnivora is in the city. It’s in the northwestern part, hidden away in a secret room in a container. Look for an open container with a red glow. Enter it and drop down, and you’ll find the robot hanging on the wall. Loot it to get some LEDs.

You’ll find the Gas Tank on a robot in the Windshaken Catwalks, in the western part of the upper floor. The claptrap is on the conveyor belt.

The first claptrap is in the west of the area, near the Chapel of Unheard Prayers. If you go to the safe house at the Chapel, go out onto the balcony in the west and jump over the railing. You’ll find the robot with the Hand Clamps on a platform on the edge of the cliff.

The second will give you a Pair of Arms. You’ll find it in the northwest. As you enter the courtyard at Fallback Tracks, follow the train tracks to the edge. The claptrap will be in the mine cart.

At the west end of the Outer Sanctum, you’ll enter a room with a big Children of the Vault sign and some stained glass windows. Turn left and break the board blocking the door. Go up the stairs and you’ll find the robot nailed to the giant letter V, next to the bunk beds. It’ll drop an Antenna Accessory.

Go all the way to the north of the map, and use the launch pad to get to the island. Follow the rocks on the south side until you find the little bot with the Sarcasm Module.

The first one is in the middle of the valley, next to the floating cube. Look under the wreckage, and you’ll get a Voice Volume Dial.

The second claptrap is far in the northeast. Follow the path until you’re in front of the ominous gate leading to the ominous building, then turn left and go into the tunnel. You’ll find the robot in the jaws of a flesh-eating plant, and when you snatch it from there, you’ll get the Figurative Speech Adapter.

Go to the northwest of the area, and follow the northern cliff until you reach a cave. The claptrap will be inside, trapped in some kind of purple gunk. It’ll drop the Heat Vents.

The other one is in the north of the map. The map makes it look like it’s on the upper level, but it’s actually below the waterfall. Follow the winding cliffs and pats and you’ll find the robot in the puddle. It’ll give you the Rotator-Cuff Module.