Gravetide Summoner is one of the wanted bounties in Destiny 2. It’s a weekly bounty you can get from Spider, the vendor at the Tangled Shore. This is one of the hard ones – you won’t have trouble finding it, but you probably will have trouble defeating the fugitive. If you get stuck while fighting the summoner or the Gravetide Ogre, our Destiny 2 Gravetide Summoner guide will help you.

How to defeat Gravetide Summoner?

First of all, you’ll need to find it. Unlike most wanted bounties, this one doesn’t tell you where to look for the Prison of Elders escapee. What you need to do is open up the map of Titan, and you’ll find a new adventure next to the landing point at Siren’s Watch. Start it and descend down the tunnels into the Methane Flush lost sector. 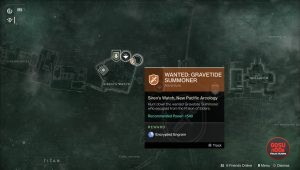 At the end of the sector, you’ll find something new: three Hive wizards standing around a cirlce, performing some kind of rite. Now, one of these is the Gravetide Summoner. He’s not too hard to kill – just use an energy weapon to knock his shield then spam him with all you’ve got – but we haven’t managed to kill him before the rite is over. It seems like it isn’t possible.

When the rite is done, a giant Gravetide Ogre will appear in the circle, and this is one enemy you don’t want to take head on. He has extremely powerful melee attacks, but thankfully, you can hide from him and take potshots from behind cover. Run back into the tunnel that connects the two large rooms, and hide behind the crates. The ogre will get stuck at the door, and you can safely shoot him from your hiding spot. He’ll try to shoot back, but the crates are indestructible, and you have all the time in the world.