One of the new Black Armory weapons in Destiny 2 is the auto rifle you can get from Ada-1. When you talk to her, you’ll see it listed on the side, but you won’t be able to get it until you have a Balistic Log. Once you obtain the frame, you’ll begin a quest similar to the first one, which will end with you getting the Ringing Nail. If you’re wondering how to start and complete the whole thing, our Destiny 2 Powerul Auto Rifle Frame quest guide will help you.

How to get Black Armory auto rifle from Ada-1? 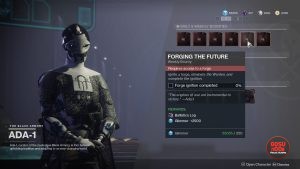 Where to find weapon core?

Talk to her after that, and you’ll get the Balistic Log. Use it to buy the frame, and then the quest will start. The first step will again require you to get a weapon core. Once you’ve found it, you’ll need to charge it with 25 Cabal kills on the EDZ. The best place for this is the large spaceship near the Sunken Isles landing point.

After that, you’ll need 75 Cabal kills and 25 Cabal multi kills with an autorifle. This is probably easiest to solve by going to the Leviathan and clearing out the enemies in the courtyard. The third step is all about precision kills. You’ll need 30, with an auto rifle. If you’re still in the raid, you can do this one there too. If not, anywhere will do – it doesn’t matter which type of enemies you kill.

Once again, you’ll need to collect radiant seeds. The Leviathan is a decent choice here as well, but we prefer Escalation Protocol – less loading screens, easier to solo. You can also try the Blind Well, if you have a group.

Now go back to Ada, and she’ll send you to the forge once more. Complete the activity there, and you’ll get your auto rifle. One of the options is the Ringing Nail, but the perks are random, so you might end up with a raw deal.