Iron Banner season 4 has just started in Destiny 2, and it brings a lot of new gear into the game. There’s one armor set for each class, and six different legendary weapons you can obtain by participating in this PvP event and completing the special new bounties. If you’re wondering what they all look like and how they behave, you’ve come to the right place – our Destiny 2 Iron Banner season 4 weapons & armor guide will show you everything you need to know.

You’ll get the items by competing in the Iron Banner, completing bounties given out by Lord Saladin, and straight up buying them from him. You’ll need to complete bounties to unlock the purchasing options, and you’ll have to spend Legendary shards and Iron Banner Tokens.

All of the new armor pieces have Iron Remembrance in their names, and they have a Far Eastern vibe to them. They’re all dark red with white markings, usually related to the Iron Lords and the activity itself. It’s too early for anyone to have an entire set so we can see it in action, but Bungie have released an image that shows off the three suits on manequins. 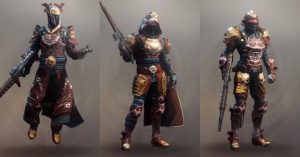 We’ve seen six Iron Banner weapons added in season 4 at this point. Visually, they go along nicely with the armor, as they also have a lot of dark red with golden motifs. Talons of The Eagle is a scout rifle with a High Impact Frame, which gives it more damage and a slower rate of fire, as well as increased accuracy when aiming down sights and standing still. Swarm of The Raven is a grenade launcher with an Aggressive Frame, which gives it high damage and recoil.

Then there’s the Bite of The Fox, a sniper rifle. It also has the Aggressive Frame, which means it’s not going to be one of the spammy snipers. Roar of The Bear is a rocket launcher with a High Impact Frame.

Breath of The Dragon is an SMG with a Lightweight Frame, which means better handling and faster movement when this weapon is drawn. Finally, there’s the Claws of The Wolf, a pulse rifle with a Rapid-Fire Frame. This means you’ll be able to carry more ammo for it, and faster reloads if you empty out the mag.