Destiny 2 just got a bit activity-richer. Bungie has released Leviathan, Eater of Worlds, the first raid lair in the Curse of Osiris DLC. It’s still unclear what exactly the new activity entails, but we do know it’s supposed to give people a similar experience to the raid, but without the tremendous time commitment. Destiny 2 Leviathan, Eater of Worlds raid lair has been launched several minutes ago, and players are already rushing in to see what it’s all about, and whether it can save the severely underwhelming expansion.

Where is the entrance to the new lair?

Once you find yourself on the raid landing platform, just keep going forward, until you reach the big doors. These were previously closed, but will now open. Once you go through them, just continue forward, jump down, and keep following this path, until you reach the purple room. This is where the first challenge takes place.

This event takes place in a purple room. There is a large death pool in the middle of the room. To overcome it and reach the orange platform at the end of it, you’ll need to use the smaller platforms with the purple lights on them. These platforms show up one by one, as soon as one player steps on them. The key to solving it is to have only one person on a platform at a time. If you have two or more, they will turn to orange and go down into the pool, killing the players.

To reach the first checkpoint, have the team follow the first player as he jumps from one platform to the other, while the others follow him in a line, one player at the time. As you get to the first larger platform, you will activate a checkpoint, and any player left behind will be able to safely cross the gap.

To make it more fun, the routes of these spawning platforms change from one checkpoint to the other. For example, the first platform line is a rather straightforward one, to the first checkpoint. This line will separate into two toward the second checkpoint, and so on. 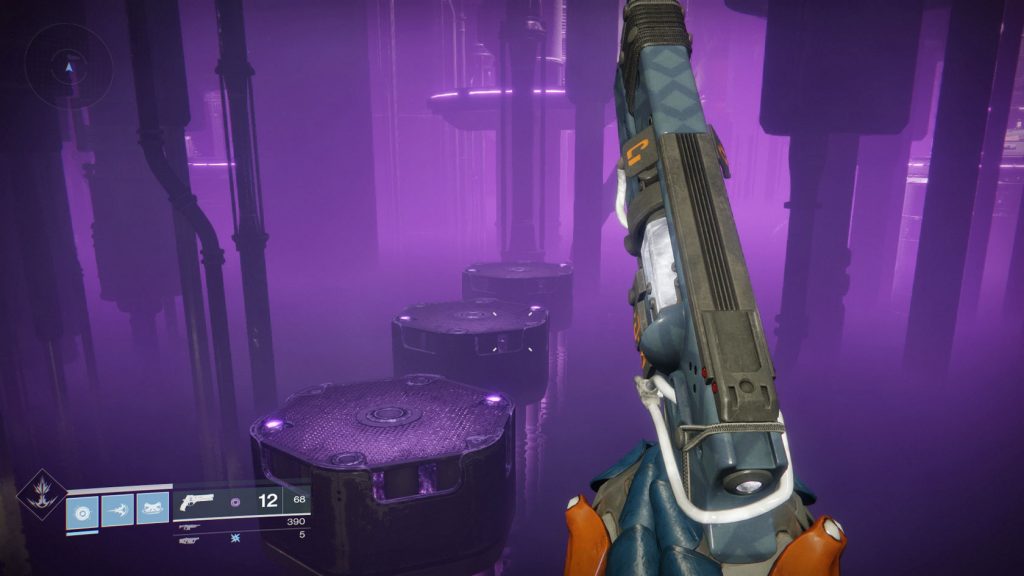 This jumping puzzle part lasts until you reach a large platform with orange parts. This is when you’ll receive a new objective – “Defeat the Loyalists”. Once you clear up the platform from incoming waves of centurions, gladiators, legionaries, beasts and more, you’ll get your first loot chest.

After you escape the reactor and defeat the loyalists, you’ll need to delve deeper. The first larger room has a shock pulse that kills everyone not behind cover. To go past this room, you’ll need to hide whenever you see the large mechanism is about to pump out the energy blast.

The next challenge takes you inside a long ejection tube. It will propel the players standing on its other end into the new place. To make it safely through, you’ll need to avoid the large stones, and aim for the platform with the trees, the one with the white light.

To break the barrier, you’ll need to split the team into three groups of two. These groups will be dedicated to the three sides of the room. They’ll need to work around the platforms with three glowing braziers on them. The goal is to have one person defend each platform, while the other person goes around and picks up the Vex Cranium, located on the small platforms near the braziers.

Since there are three main platforms, each dedicated to either Solar, Arc or Void elements, this is something you need to keep an eye on. Once you pick up one Vex Cranium, the event starts, and mines on the giant cube start to glow in three different color – Solar, Arc and Void. You’ll want to place those rare Vex Craniums on the platform of the same color as the lights on the cube. For example, do not put two Vex Craniums on the void platform, while the cube is showing solar ones.

These Vex Craniums charge up after a while, becoming Void, Arc or Solar Craniums. You’ll notice it, as they’ll start to glow. Once they are charged, you can use them to shot down the mines on the barrier.

TLDR: To break the barrier, have 3 teams of two people, one picking up the Vex Cranium and placing it on the main platform, while the other defends it. The Vex Cranium charges up, and you can shoot down the mines on the central barrier.

How to beat Argos, Eater of Worlds boss

As the fight starts, you’ll notice there are glowing orbs around the barrier that surrounds Argos. Just like in the previous stage, you’ll need to collect Vex Craniums and charge them up on the platforms of the correct color. The waves of mobs coming at you are more viscous this time, so be careful.

Once the Craniums are charged up, you can use them to shoot the glowing orbs. Void powered Craniums are for the purple orbs, Arc for the white and Solar for the orange orbs. This will make them slide down the barrier, into the corners and disable the shield. You’ll have to shoot them at the same time, or the shield won’t go down. Most of the team should be positioned on the platform towards which the top orbs slide as Argos will focus on it. It is easy to spot, as the central orb is not exactly on the top, but slightly toward one side.

Once the shield is down, you need to focus on Argos’s head. Any charged Craniums you haven’t spent should be brought for more power, while the other team members protect them by shooting down the small projectiles Argos spews.

After a while, Argos will pull out a large shield and it will begin collecting energy. Shortly after, you’ll receive a message that says “Void readings spike” . The large shield will go down once again. This is when the large platforms around the boss pop up. You’ll need to group up and focus your efforts on one of the six crystals Argos reveals during this phase. Two of them are on the top of him, two on his back, and two on his lower arms. You can bring down two crystals per turn at best, making it a three-round kill. As you get two crystals down, leave the platform and repeat the previous steps, until Argos is defeated.

Apart from a bunch of engrams and special tokens, we don’t know for certain which rewards the raid lair will provide. If we’re lucky, a set of unique armor for each class. We know one of the vendors has started selling Eater of Worlds ornaments, which probably make regular armor look like the one obtained from the raid lair.

We’re going to monitor the teams trying to get the highly sought-after title of world first, and we’ll report back with details. Stay tuned.