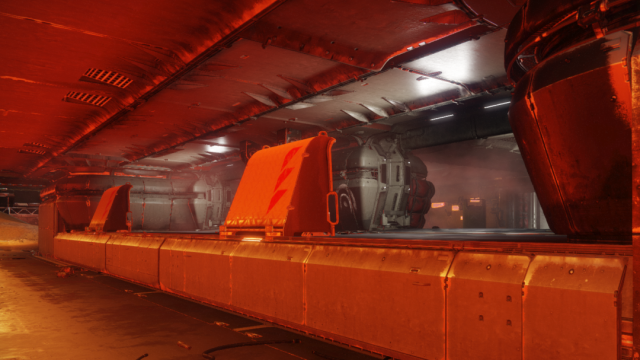 The Entrance to the Destiny 2 Skydock IV Lost Sector.

The vast majority of Lost Sectors are located in the European Dead Zone (EDZ), and with Skydock IV things are no different. More precisely, it is a Lost Sector in the Sunken Isles sector. And finding it is relatively easy, it is considered to be one of the easier sectors to find. Once you spawn at the Sunken Isles landing zone, what you need to do is to head toward Firebase Hades’ middle area. From there, you’ll spot a tunnel entrance on your right, with warm-orange glowing lights at the entrance. Enter the tunnel and then immediately turn left. Soon you will spot a huge pit, jump down. From there, proceed left and just follow the only way down until you eventually reach all the rooms of the lost sector.

So there you have that’s how you find the location of this lost sector. Although it might sound complicated, it’s actually rather straightforward to come there. The most important part is to properly locate the entrance, which you can see in our featured image above. From there, all you need to do is to keep descending and you’ll eventually meet Legionaries led by Unstoppable Incendior. The boss of this area is Colossus, previously known as Devourer Darg. With that said, our guide is now completed. If you are more of a visual-type, check out this video to learn how to get to the Skydock IV lost sector.

NEXT POSTIdle Heroes Codes September 2022, How to Redeem