Tommy’s Matchbook is a new exotic weapon in Destiny 2. It’s an auto rifle that overheats, doing more damage to enemies but also burning its wielder. Once you’ve grabbed it from the season pass reward screen, you can get an exotic quest that will allow you to earn a catalyst for it, making it even more useful. If you’re wondering how to complete this quest, keep reading our Destiny 2 Tommy’s Matchbook catalyst exotic quest – A Good Match guide.

Once you’ve obtained Tommy’s Matchbook, go and talk to Banshee-44, the gunsmith at the Tower. He’ll give you a new exotic quest, called A Good Match. The first step will require you to kill 100 guardians in Crucible with an auto rifle, score 200 multikills with an auto rifle, and earn 400 points. You can get these points by completing strikes, Nightfall, Gambit or Crucible matches. The description mentions PvP activities are the most lucrative – we managed to get a mere 2 points from a single classic mix Crucible match, so take that with a grain of salt.

After you’ve slogged through eleventy zillion strikes in order to complete the Active Duty step, you’ll need to go back and talk to Banshee again. He’ll give you the catalyst and install it on Tommy’s Matchbook, but it won’t be unlocked yet. Before you gain access to its unique perk, you’ll need to kill 700 enemies with the weapon. Once you do, you’ll get a new perk called Heat of The Moment, which increases your health gain while Ignition Trigger is active. This means it’ll be that much easier to recover from the burning damage caused by the weapon’s constant and, quite frankly, tiring overheating. 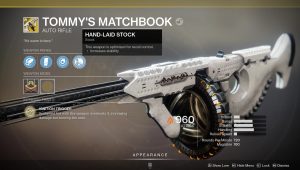 The weapon itself is pretty fun to use, at least for now. We’ll see if we think it’s worth it after we’re through with the impossible grind of getting the catalyst.

NEXT POSTCoD Warzone How to Extract Money in Plunder