Truth is an exotic weapon in Destiny 2. It’s a rocket launcher that was added in the Season of Opulence. It has the ability to lock on targets when aiming down sights, which makes the rockets follow them. In order to acquire it, you’ll have to complete a quest which involves finishing an ascendant challenge, piecing together a map and beating a specific strike. If you get stuck at any point, our Destiny 2 Truth exotic rocket launcher quest guide will show you the way.

How to start Truth exotic quest?

First off, you’ll need to complete a Menagerie run. Once you kill the last boss, you’ll get an item called A Scrap of Paper. It’ll direct you towards Petra Venj, the Dreaming City vendor. Talk to her, and she’ll ask you to loot an Ascendant Chest. This doesn’t refer to one of the invisible platform chests around the Dreaming City, but rather to the chest at the end of an Ascendant Challenge. You’ll need the weekly bounty from Petra, of course.

The next step requires you to find and decode four map fragments in order to piece together the map itself. The quest item will contain descriptions that will point you towards the correct locations. At the time of writing, it was possible to get all four fragments from Petra for free. We don’t know whether this is a bug, so we’re still going to show you the proper locations.

Truesighted, scour the other chests

This one is pretty easy, although the language makes it seems hidden. You’ll get it by opening any of the ascendant chests in the Dreaming City. We used the one in the Strand, directly above the overlook where Petra spends her time. Make sure you have a bottle of the Tincture of Queensfoil. To decode it, you’ll have to kill 100 Hive on the Tangled Shore. Regular grunts are worth one point, while knights are worth 10.

Near the cistern on the centaur

You’ll find this one in the southwestern corner of Nessus, in an area called the Cistern. Go to the giant concrete pillar that houses the Well of Flame. Follow the wall to the right and look towards the big Vex milk lake. Down a Tincture of Queensfoil and follow the invisible platforms to the chest. You’ll find the map piece inside it. In order to decode it, you’ll have to get a Corsair Down badge and bring it to the outpost.

Child of darkness in the tangled jetsam

The third piece is on the Tangled Shore. Go to the Jetsam of Saturn area and look for a cave entrance on the southern side of the downed ship. There’s an door in the hull one floor above it – go through it. It will lead you to the Hall of The Exalted. Go all the way to the end and kill the Hungering Ogre. He will drop the map piece you’re looking for. In order to decode it, you’ll have to complete three Nightfall strikes with a Power handicap of 100, and score 60 final blows with rocket launchers in Nightfall. 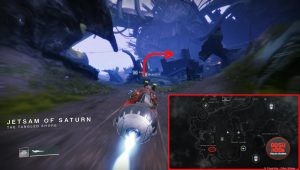 If you haven’t spent much time on Nightfall, you might be confused by the whole power handicap thing. You’ll need an item called Nightfall Challenge Card. It’s a consumable you can get from Xur, among other places. Interact with it in your inventory, and you’ll be allowed to set different modifiers. One of them decreases your power and increases your score – that’s the one you’re looking for. You’ll need to set it to at least 100, which means you’ll need to be 100 power levels ahead of the Nightfall requirement.

Alongside the chosen as night falls

This one requires you to complete any Nightfall strike. As soon as you see the victory screen, you’ll get the map piece. Decoding it is done by killing 50 enemies on Nessus using a rocket launcher while Ascended (under the influence of the Tincture of Queensfoil). Multi-kills count as more than one kill, so try to go for those whenever possible.

The final step requires you to complete the Warden of Nothing strike on the Tangled shore, while having the Ascended buff and finding one last ascended chest. To get to the chest, you’ll need to find and interact with several relics hidden across the strike. There’s seven of them in total, but you don’t need all of them – four will do the trick. Every time you collect one, a message will pop up telling you an ascendant platform has appeared. Once you nab the fourth, the game will tell you all platforms have been revealed.

You’ll find the first relic almost as soon as you get the objective to head deeper into the prison. As you cross the chasm, past the platform with the cryo chambers, look on top of the crate to the left of the spire entrance. The second one is in the second tunnel, behind one of the pikes parked by the side.

The third is in the area where you fight the minotaur on the platform between the two tracks. It’s up on the pipes above the train tracks, near the tunnel entrance. As you leave the train area through the corridor with the pipes, you’ll notice the fourth one atop the yellow pipes on the right.

Now all you have to do is defeat the boss (the real boss), then jump out the window and into the abyss. The platforms will be there to guide you, and you’ll find a chest on the final one. The Truth exotic rocket launcher will be in it. You’ll only need to talk to some people again to complete the quest. 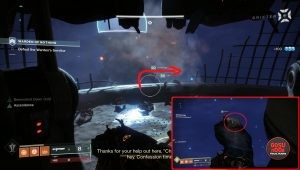 NEXT POSTWitcher 3 Nintendo Switch Port Will Run at 720p Docked