Wish-Ender exotic bow is one of the rarest weapons in Destiny 2. It’s a bow that grants you Truesight and has piercing arrows that do double damage. However, it’s really hard to get. You’ll need to be at least power level 550 (although 570 is recommendable), and look for it on a specific week. Even then, you’ll have trouble, as the exotic quest involves summoning secret bosses in a pretty tough mission. This guide is going to show you how to get Destiny 2 Wish-Ender exotic bow, how to use the Dreaming Token of Eriviks, Querim and Xavoth.

How to get Wish Ender exotic weapon in Destiny 2?

The first step involves finishing the Shattered Throne mission. It is only available on the third week, when the curse in the Dreaming City is the strongest. In order to start it, you’ll need to get to a special area called The Confluence. There are three portals leading there – the easiest one to reach is at the Spine of Keres.

When you’re in the small garden in front of the observatory, turn left towards the bridge. Before you reach it, turn right and go down the path by the cliff. Follow it to a secret cave, inside which you’ll find the portal. Once you’re in The Confluence, simply follow the corridors until you reach a giant portal with an Awoken in front of it. Talk to the Awoken and enter the portal.

Once you’ve cleared the mission, you’ll need to play another one. Go to Four-Horn Gulch in the Tangled Shore, and look for Toland’s spirit next to the building on the right when you enter the area. Interact with it to start the mission. The recommended level for this one is 580. When you complete it, you’ll get three tokens, each of which is used to summon a secret boss in the Shattered Throne. 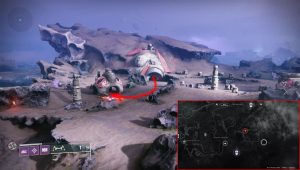 This is the first token you’ll get to use, in the first area of the mission. You’ll need an arc charge found in the temple with the sing of the dragon – it’s on the upper floor, and you’ll have to scale the cliffs to get there. For a detailed description of where to go, check out the video below (around the 2:50 mark). Once you have the charge, you’ll need to bring it to a nearby statue – the one that isn’t holding anything in its hands. Use it on the statue, and you’ll summon the boss. Once the boss is dead, the token will be charged.

You’ll charge the second token in the area where you walk across the beams near the ceiling. As soon as you enter, turn right and you’ll find the arc charge. Afterwards, you’ll have to find the statue (again, the one that’s empty-handed) in the area. You can see it in the video below, around 3:50.

The next orb is in the thrall gauntlet. As you enter, go into the alcove on the right to find the arc charge (4:30 in the video). Take it to the end of the gauntlet, and look for the statue on the right after you drop down. This will open the giant door in the next section. This is where the second boss fight takes place. Kill the boss to charge the second token.

You can fix up the last token during the ogre boss fight. The charge will appear near the exit after you’ve dealt with the invisible Minotaur, and the statue is to the left of the entrance. Using the former on the latter will summon another ogre. Once you’ve dealt with him, you’ll get the final token. The video covers this part starting from the 5:30 mark.

Once that is done, leave the room and approach the statue with the glowing bowls at its feet. Loot them, and you’ll get the Wish-Ender exotic bow.