One of the questions we often get is how to start supply/trade routes between settlements and consequently how do you move settlers between your settlements in Fallout 4. Once you go through the process it is quiet easy, but at first it may seem confusing because the interface doesn’t clearly show how to do these things. Lets just get one thing out of the way first – supply lines are not trade routes. There is no such thing as a trade route in the game. No income will come out of establishing supply lines.

We have some more guides about problems with settlements:

There are many reasons why you would want to establish supply routes. First of all, settlements that are linked via supply lines share their workshop inventory. This means that if you have a surplus of one crafting material (back in Sanctuary for example), but you want to build stuff in a new settlement with nothing in its workshop inventory and you have a supply line going, you will be able to use resources stored in Sanctuary. You might want to have one settlement entirely dedicated to trade and all your settlers are busy tending to their shops. That might mean that you do not have enough food in that settlement. You have to haul it from another settlement that might be a dedicated farming community. This is what a supply route is for. It can also help you get rid of settlers you don’t want. Provide resources from one settlement to another that is lacking it and sharing workshop inventory. Settlements with open water access can provide that resource to the others so you do not have to spend craft materials to build water purification systems and pumps everywhere. You might even want to make some of the unique settlements, like Boston Airport (which has no food or water supply available), the pride of the city so you have to bring in all the resources from other settlements.

First thing you’ll have to do is have Charisma level 6 and Local Leader perk active. This means you dedicated yourself to settlement management.

Setting up a supply line will cost you one settler that will from then on be dedicated to moving supplies between settlements. Open up the Workshop menu while in a settlement (hold V on the PC for example) and walk up to an unassigned settler. In the bottom of the screen you will see available commands for that settler and one of them will be Supply Line (press Q on the PC). Once you press the command a list of all available settlements will open up and you can choose which settlement you want to link to. Confirm your selection and presto – you have these connected. You can go into your Pip-Boy map and choose to show supply lines on the map (again, bottom of the screen shows available commands – one of them is Show Supply Lines).To cancel a supply line you will have to wait for the assigned settler to come to one of the settlements (just sleep in a bed). You will see a Provisioner settler at one point. Open up the Workshop Menu and either tell him to move to another settlement or assign him to do some other job in the current settlement and he will cancel his supply route duties. 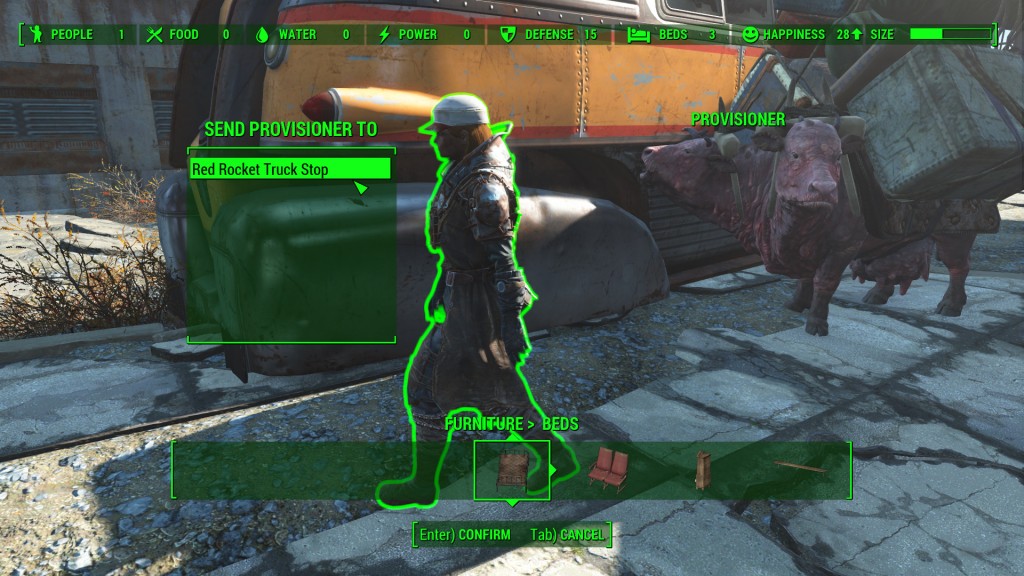 Moving settlers to another place in Fallout 4

Another thing that is similar to establishing supply lines and is often asked about is how to move settlers to another settlement. Maybe you have too many people at Sanctuary and you want to build a thriving community at another, more central, location in the Commonwealth. Perhaps you have better vendors at a peripheral settlement. This is also done via the command menu found on the bottom of the Workshop menu. Open the Workshop menu and walk up to the settler you want to move. Move command should show up in the bottom command menu. Once you press it you will get a list of available settlements and the settler will go there. Just make sure you have enough resources at the target settlement to support new population. One thing to note is that named settlers, like Mama Murphy and the rest of the people from Concord, can not be moved to other settlements.