C2W is the name of Mission 4 in the first Chapter of MGS5: The Phantom Pain. The name of this mission is not the only thing that’s short. Time it takes to complete it is just a few minutes if you choose to do it quickly. It will reward you with 50,000 GMP at the end and you have a chance of extracting personnel with Gunsmith (Shotguns) and Rescuer skills.

Destroy the Soviet comms equipment to prevent reinforcements being sent between outposts.

This mission has a simple solution (if you are not hunting for any of the bonus mission steps). You can go destroy the three antennas while trying to avoid enemy patrols, or you can just sneak into the main shack and destroy the comm console (shoot at it – you don’t even need explosives). This will complete the mission right away! 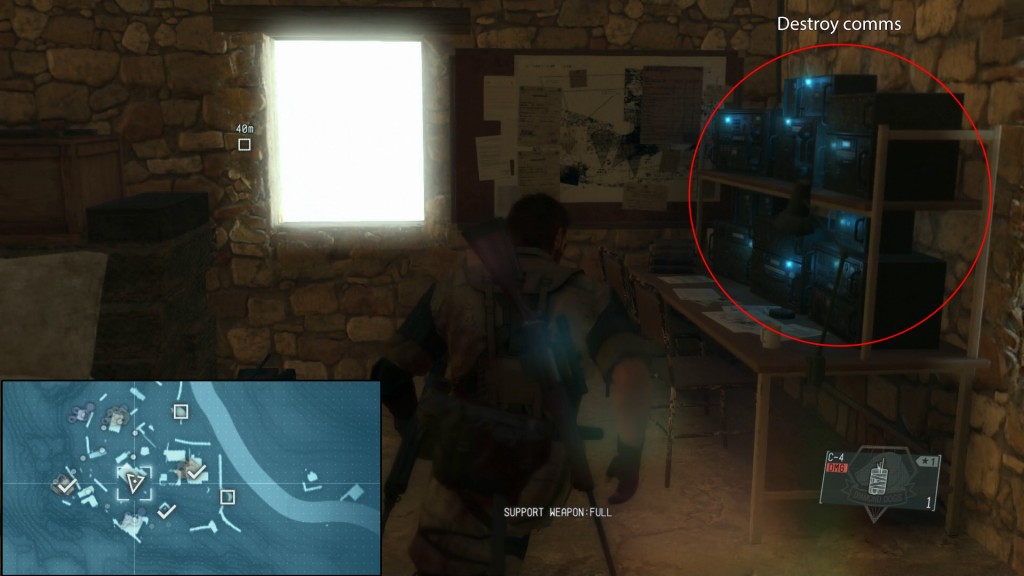 Identified the comms equipment at the Eastern Communications Post

You can do this from a safe distance, by using your binoculars and zooming in all the way. There are three antennas you need to zoom in on and are easy to spot.

Destroyed the comms equipment at the Eastern Communications Post

You can do it the easy way described above or use C4 explosive on each of them while avoiding guards. Best done at night, because the antenna in the middle of the base is a bit tricky to get to during the day.

Secured the rough diamonds hidden near the Eastern Communications Post

This one was very tricky to find. Diamonds are hidden along a little pathway that takes you around to the back of the Eastern Communications Post. Best look at the map screenshots to find its exact location. Not only is it out of the way, it is also hidden among the rocks and I’ve actually missed it a couple of times.

Transmitter in question is actually the comms console shown on the big screenshot at the beginning of this article. Just enter the building in the middle of the Post and shoot at the console to complete this step and the mission itself.

Wialo Village is not on the way, but prisoners need extracting and best do this when you are not attempting S-Rank for this mission. They are in the south part of Wialo Village, in the first couple of houses/garages. You might notice they call out for help … faintly, but you might as well use the screenshots bellow to locate them.

Extracted the materials container from the Eastern Communications Post

You will have to have an upgraded Fulton device to be able to do this. There are two containers to be extracted at Eastern Communications Post and one will complete this task.

Previous Mission
A Hero’s Way Next Mission
Over The Fence

NEXT POSTWhere do the bees sleep walkthrough | MGS5: The phantom Pain