D-Walker is your own personal Walker Gear in Metal Gear Solid 5: The Phantom Pain. He’s highly customizable, and once you get him, you’ll be able to develop him any way you want. Unlike other buddies, there’s no bond to strengthen. Instead, you’ll unlock new abilities by researching upgrades in R&D. In this guide, we’re going to tell you everything we know about D-Walker, different upgrades and how to use them best. 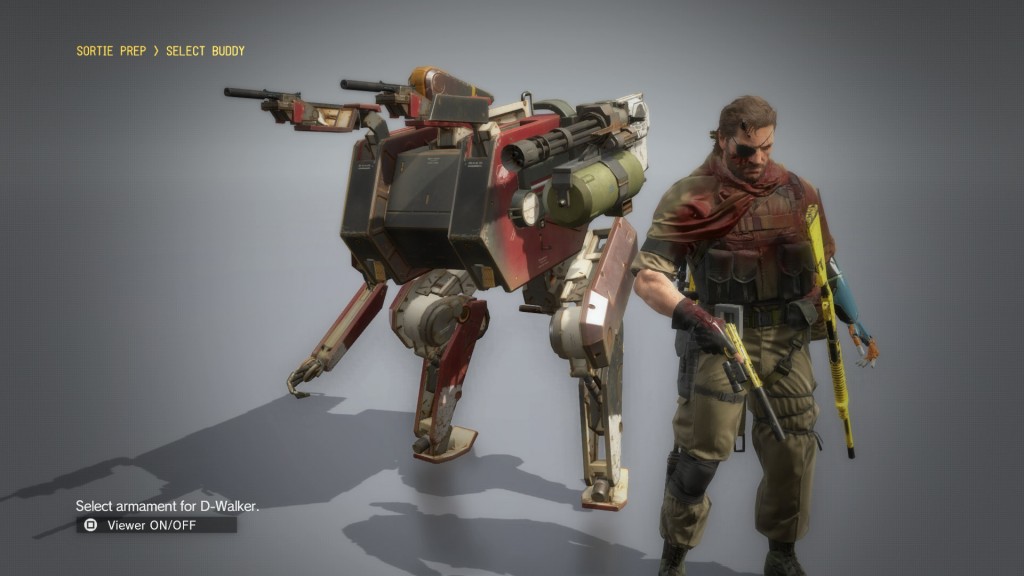 D-Walker is a bipedal robot, a product of the genious mind of Huey Emmerich. His greatest strength is that he can be finely tuned by adding and removing parts, which makes him the most adaptable companion in the game.

He may not be as charming as the other three (living) buddies, but he’s certainly as useful as any of them. Even though he usually walks on two legs, he can glide on little wheels, which is a silent option, so you can even sneak around while riding him.

You’ll get D-Walker after you finish Mission 12: Hellbound and save Emmerich from the Soviets. He’ll accompany you to Mother Base, and a few missions later, the game will let you know there’s a Walker Gear at your disposal.

The robot is quite versatile – you can mould him into anything you like using the upgrades. His armor can provide protection or camouflage, while his head can serve as a scouting device. He has an arm which can be used to pick up items, fight and throw enemies, or use a handgun (with a non-lethal option).

He starts out with a gatling gun, but it can be replaced by a rocket launcher, a flame thrower or a stun gun. There are a couple of upgrades that are unlocked by getting key items, like the F-Ballista.

D-Walker doesn’t have uniforms like the other buddies, but he can be customized like a vehicle. There’s a broad range of patterns and colors you can choose. Here are just a few:

NEXT POSTHearts of Stone Expansion Release Date | The Witcher 3