Badgers are one of the many forms of wildlife in Red Dead Redemption 2. They’re nasty little critters that prey on even smaller critters – squirrels, moles and prairie dogs. You’ll need to hunt them if you want to craft upgrades for your equipment – their pelt and claws are pretty useful. You can also cook their meat for food. If you have trouble finding them, this guide is going to show you a bunch of Red Dead Redemption 2 badgers locations.

Where to find badgers in RDR2?

Badgers are present in most parts of the map – they’re one of the most numerous animals in the game. The only places where you won’t find any are up in the north – guess the cold doesn’t agree with them. Thanks to their size, they can be kind of tough to spot, so you’ll have to strain your eyes a bit. The best place to find them would be southwest Lemoyne, around the town of Rhodes. If that’s too far for you, there’s also a good hotspot in the Tall Trees area, west of Blackwater. 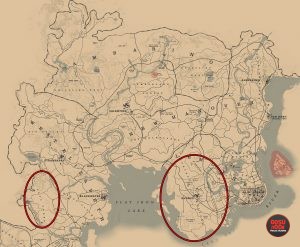 The area around Tumbleweed is decently populated by badgers – it’s far from ideal, but if traveling to Lemoyne or Tall Trees is too much of a slog, this might do the job. If you’re in the north and don’t want to travel, you might want to check out the upper parts of the Dakota River, near Bacchus Bridge. The badgers’ pelts and claws don’t go for much in the market, but you can use them to craft all kinds of stuff. The carcasses can be sold for $3 is they’re in good condition, so you even stand to make some money if it’s pelts and claws you’re after. The Varmint Rifle will kill them but won’t damage the remains, which makes it the perfect weapon for clean kills.

PREVIOUS POSTRed Dead Redemption 2 Clean Your Clothes – How to

NEXT POSTRed Dead Redemption 2 Lantern – Where to Find