Bad reception is one of the side missions in Borderlands 3. In it, you’ll have to destroy a bunch of antennae on Claptrap’s behalf. It all goes smoothly until you get to the final dish. The first two are easy, but you can’t get to the third one. A lot of people are getting stuck here, which is why we’ve decided to write this guide, to help you complete Borderlands 3 Bad Reception mission and show you how to destroy final dish.

How to destroy final dish in Bad Reception?

You’ll notice the map marker for the third dish points outside the map’s bounds. Like us, you’ll probably think that’s some area you haven’t unlocked yet, that you’ve taken the mission on too early in the main quest. You might decided to leave it for later, but as it turns out, that won’t help at all.

The thing is, the last antenna is actually outside of the map. You can’t reach it on foot. What you have to do is shoot it from afar, from inside the map’s bounds. Stand somewhere around the place we’ve marked on the map and look towards the marker. Move around a a bit, maybe look for a vantage point, and you’ll see it soon enough.

You will need a sniper rifle, though. We’ve tried with rocket launchers and assault rifles, but they can’t really do the trick. We were lucky enough to get our first sniper nearby, from the group of monsters southwest of the third dish. 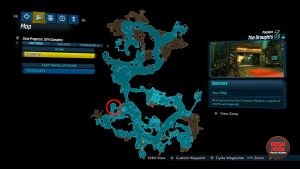 It feels like a dirty little trick at first, but it’s actually quite clever. It made us rethink how we approach the game, and that’s not something you’d expect from a Borderlands title. So kudos to Gearbox for that, at least.