After a few delays, Destiny 2 The Witch Queen expansion is finally here. The maintenance is completed, and tens of thousands of fans are rushing to the servers to put their hands on the new content. Unfortunately, many PS4 players can’t even download The Witch Queen even after the update went live. On the other hand, countless players are being greeted with a “Destiny 2 is temporarily at capacity” message. Can you somehow bypass these issues? Here’s what we know. 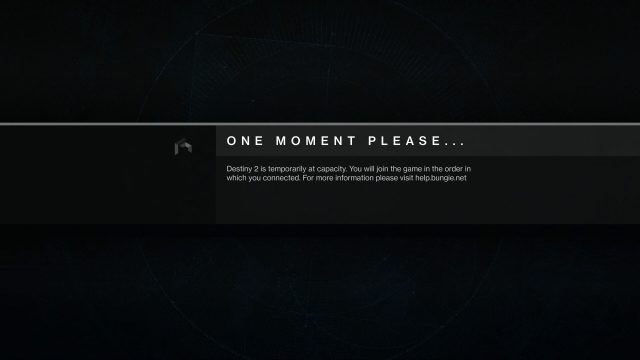 Let’s start with the bigger problem first. Due to an “unforeseen issue”, Destiny 2 players on PlayStation 4 were left without a chance to preload The Witch Queen Update 4.0.0.1 at the same time as everyone else. Instead, they were allowed to download “all required content” after the update went live. But the problem didn’t end there. Even after downloading approximately 72 GB of files, PlayStation players were unable to play the game. Apparently, the solution is simple. As confirmed by Bungie, in order to complete The Witch Queen update on PS4, players will need to open Destiny 2. The game will then continue with downloading the rest of the necessary files from the expansion.

Destiny 2 is Temporarily at Capacity Explained

The other main issue that Destiny 2 players are currently experiencing is much more straightforward. The infamous “One moment please” message across the whole screen. It’s there to inform you that Destiny 2 servers are currently at full capacity. This means that there are more players trying to play the game than the servers can accept.

There’s not much you can do here except to wait in a queue until a spot opens up for you. For how long you’ll have to wait, no one really knows. Just make sure to stay connected to Destiny 2 during this period, as players will be placed in the game in order in which they connected.