How to start Haunted Forest at Amanda Holliday’s?

In order to star the activity, you’ll first have to finish a mission for Amanda Holliday. Go talk to her at the Tower hangar, and she’ll send you on your quest. Once you’re done with that, the Haunted Forest will open up, and your next quest will involve visiting it. You’ll see it appear on the Tower map. 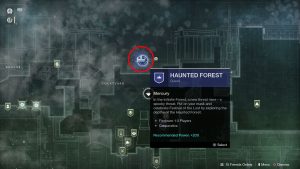 Once you’ve completed the Haunted Forest for the first time, as part of Amanda Holliday’s mission, you’ll get the Fighting Lion exotic grenade launcher and the Fighting Lion catalyst. The launcher has a perk that lets grenades bounce off surfaces and allows you to detonate them at will. Direct hits also do more damage.

Haunted Forest chests are secret loot containers with 2-5 Fragmented Soul pieces, which are a new currency used to buy masks from Amanda Holliday. We were able to spot them solely thanks to the green light glowing by the lock. You can find a detailed guide here – Haunted Forest Chests Locations – How to get Fragmented Souls

Haunted Forest in Destiny 2 – How Does it Work?

From what we can gather, Haunted Forest in the Destiny 2 Festival of the Lost is going to work similarly to the Infinite Forest in the Curse of Osiris DLC. Basically, you go down into this hell-hole, either solo, with your fireteam, or with strangers. You have fifteen minutes to push as far as you can. Depending on how far you go, you get better rewards the further you get. Sounds simple, doesn’t it? It is, but that doesn’t mean it’ll be easy; far from it.

Of course, enemies ramp up in difficulty as you go deeper into the Haunted Forest. You can expect to run into some extremely difficult enemies to make your life a living hell, and make sure you don’t make it too far in your first run. That’s fine, though, because the Haunted Forest should be procedurally generated, just like Infinite Forest. In other words, no two runs are going to be exactly the same. The Infinite Forest fell short there, not offering enough variety. The hope is that Haunted Forest won’t fall into the same trap.

However, even though the Haunted Forest is evocative of the Infinite Forest, it won’t actually be connected to it. You’ll get access to the Haunted Forest through a completely separate mode. Which is probably for the best, because the Infinite Forest was extremely disappointing. However, the real reason behind the different access point is not connected to that. Which brings me to our next section.

Can I Play Haunted Forest with Destiny 2 Vanilla, Without DLC?

Yes, you can, according to Community Manager dmg04 on Reddit. Even though the concept of the Infinite Forest debuted in the Curse of Osiris DLC, everybody that has Destiny 2 will have access to the Infinite Forest. This makes sense, because the Festival of the Lost is an event that everyone should be able to play. It would be a really bad move to gate it off.

Not that Bungie hasn’t gated content off for Guardians that don’t buy DLC. We all remember how they blocked the Prestige difficulty for the Leviathan Raid suddenly for the players that only owned the base version. In fact, I wouldn’t be surprised if the fact they’re letting everyone play Haunted Forest isn’t an echo of the backlash they faced then. That’s a cynical view, yes, but it doesn’t sound implausible. Either way, to circle back to the point; yes, you absolutely can play Haunted Forest even if you don’t have any Destiny 2 DLCs.

NEXT POSTComplete a Challenge Anywhere in the System – Destiny 2