Complete a challenge anywhere in the system is one of the bounties in Destiny 2. It’s given out by Tess Everis of the Eververse company, and it seems like it should be pretty easy to do. However, something isn’t right, as large numbers of players report they aren’t able to complete the bounty, despite doing all kinds of stuff. This guide will show you how to complete a challenge anywhere in the system in Destiny 2.

Two things might be happening here: either it’s a bug, or you aren’t aware of the changes they’ve made to the challenges. If it’s the latter, you should know that challenges now appear on the map as yellow stars. Simply look for one anywhere in the game world, complete it, and the bounty should be complete as well. Sometimes they’ll be about completing specific activities, like heroic public events, while other times they might ask you to kill certain kinds of enemies.

However, there’s also the possiblity that it’s a bug. It has happened before, so it wouldn’t be too out of the ordinary. Folks have reported doing all kinds of stuff all over the galaxy and getting no results. If you’re one of them, you’ll just have to wait until Bungie issues a hotfix to deal with the issue. Hopefully that happens before next week’s reset, or you’ll have to lose out on that particular bounty. 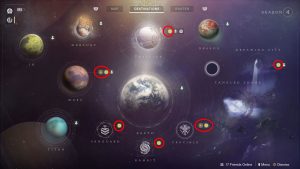 It should be no big deal, either way. You’ll have your hands full with the Festival of The Lost in the following weeks, doing a bunch of stuff like the Haunted Forest event, collecting masks, finding out who killed Master Ives, and completing the new bounties from Amanda Holliday. You’ll be spoiled for choice, so it shouldn’t matter in the long run.

NEXT POSTDestiny 2 Veteran Rewards Not Coming Next Week