Nascent Dawn 2/5 is one of the many missions in Destiny 2. It’s the second part of the Nascent Dawn quest chain, which you can get by talking to Anna Bray after finishing the story campaign. It only became available after this week’s reset, and it seems like the remaining quests will also appear once a week. There are only three steps to it, but it can still be overwhelming. If you’re having trouble completing it, you should keep reading our Destiny 2 Nascent Dawn 2/5 quest guide.

How to get Javelin kills?

When you first log in after the weekly reset, you’ll have the Nascent Dawn in your milestones. Go and talk to Anna Bray on Mars, and you’ll get the second quest. The first part tasks you with getting twenty five javelin kills. In order to complete it, you’ll have to go into the Escape Protocol public event, then use a Rasputin Armory Code on the hatch to get the Valkyrie. Once you’ve got the spear, you’ll have to use it to kill 25 enemies. It might be too much for one go, so make sure you have a couple of codes in your inventory.

The second part of the quest involves completing the Psionic Potential heroic adventure. It will appear outside Anna’s building on Mars, but only after you’ve completed all other adventures on the planet. The recommended power level is 350, and if you come prepared, it shouldn’t pose a problem.

The third step is all about finding a Sleeper Node in the Ma’adim Subterrane lost sector. It’s pretty much unmissable, in a chamber after you leave the first large hall via the stone bridge. You won’t need an Override Frequency to open it – simply approach and interact with it.

All you have to do now is socket the diary and talk to Anna Bray, and she’ll give you the Braytech RWP Mk.2. It’s a legendary scout rifle that drops at 345 power, regardless of your level. It has the High Impact intrinsic perk, which gives it increased range and damage, with a lowered rate of fire. Stacking hits will also increase its stability for a short period, thanks to its trait. 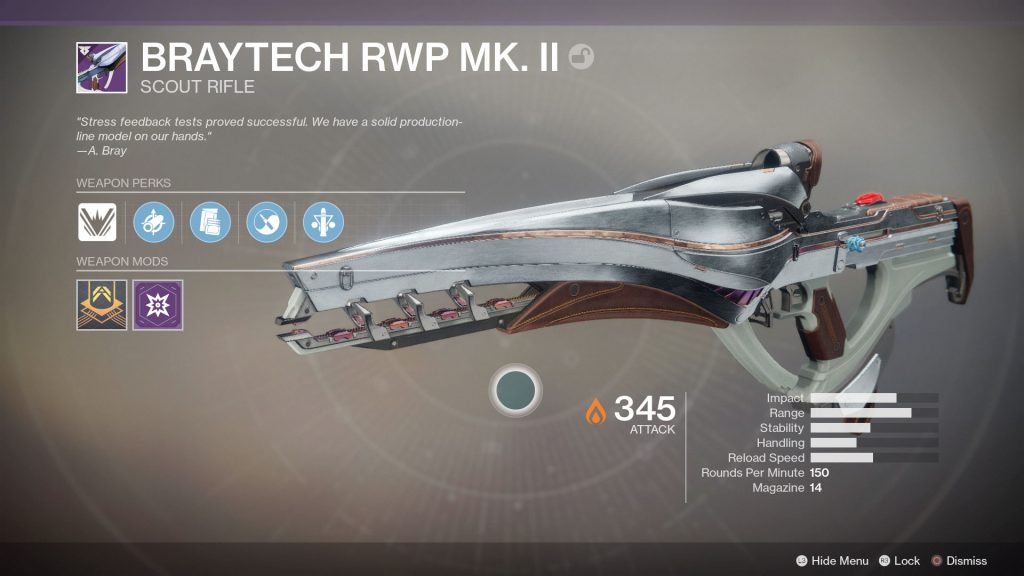