Vex transformers are collectibles in Destiny 2. They’re glowing cubes you can find in the Impossible Task mission. Destroying them will yield precious Vex Chronometric Scraps. They can be found on Io, Nessus and Mercury – five on each. Some are in obvious places, but others are pretty well hidden. This guide is going to show you all Destiny 2 Vex transformer locations on Io, Nessus and Mercury.

The Vex transformer in the Sanctum of Bones is near the entrance. Spawn at the Rupture, then head into the cave. As soon as you enter the main chamber, look to the left. You’ll see a limestone pillar. Jump on top of it, and use it to get up to the ledge above it. It’ll lead you to a small chamber where the collectible rests.

The next one is out in the open. Land at the Rupture, then head south towards the entrance to the Pyramidion. Before going down into the hole, there’s a ledge on the right you can climb onto. Follow it to the end and you’ll find a hole leading to a bunch of floating platforms. If you look up, you’ll see the transformer above you.

The one in Lost Oasis is directly under the giant tree at Spine Burrows. Land at the Lost Oasis landing spot, then follow the road under the tree. As soon as you’re below it, look up and you’ll see it among the roots soon enough.

The penultimate transformer is in Terrabase Charon. To get to it, you should land at Lost Oasis and head west through the canyon. As soon as you enter the area through the hole in the hull, look up and to the left. You’ll see it on the ledge, in the very first room of the area.

The last transformer is at Excavation Site II. Land at Giant’s Scar and head into the big, round valley where the drilling takes place. Follow the ramp on the right up, then go into the corridor. After the first big chamber, you’ll end up in a small room with a machine in the middle of it. Turn right and look for a broken door. Go through it, and you’ll find the collectible there.

All of the Vex transformers on Mercury are listed as being in the Lighthouse. After all, it’s a tiny map. The first one is at the actual Lighthouse. When you land, turn to face the entrance, then follow the ledge on the left all the way to the end. Look up, and you’ll see the collectible.

The next one is in the giant pillar in the east. Thankfully, you don’t have to actually go there. You can snipe it from the main part of the area – it’s above the jumping pad and below the Eye of Sauron.

The following transformer is even easier. If you stand in front of the Lighthouse and look towards the pyramid, zoom in, and you might see it hovering in the air near the latter. You may need a scoped weapon for this one.

The last one is on the west side of the main land mass. Approach the edge near the marker, a bit south from the pillar, and look down. You’ll see a ledge. Drop down on it and follow it north. 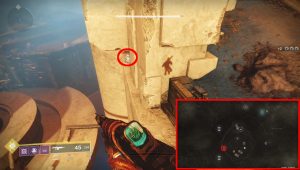 Spawn at Exodus Black, then follow the cliff on your right. Go into the cave and follow it to the room with the portal, on the way to the Chamber of Sky. Drop down among the enemies and look up – you’ll see the cube near the ceiling.

This one’s easy to find, but you’ll have to think outside the box. Land at Artifact’s Edge, then turn around to face the antenna-like structure on the platform. Approach the edge and look into the distance. You should see the cube floating above the red grass – just shoot it from there.

Land at Artifact’s Edge, then head towards the Hallows. Drop down into the hole and follow the tunnel on the left. Once you’re in the area where the public event takes place, turn left and look for an alcove in the wall – that’s where the cube will be.

Land at the Cistern, then head towards the Glade of Echoes. As you descend down the hill, keep your eyes on the left – after a while, you’ll notice a shack built of sheet metal. Go inside and look to the left – the cube will be by the door.

Land at Watcher’s Grave and follow the path to the Tangle. When you reach a fork in the road, keep to the left. Pass the big stone ball, then jump onto the roots on the left. You’ll need to go under the giant tree – the cube will be tangled in the roots.