Buck Antler Trinket is one of the charms you can buy from Gus, the new vendor in Red Dead Online. When worn, it will increase your chances of getting better quality pelts and skins from animals in perfect condition. In order to get it, you’ll need to bring Gus a pair of buck antlers, a Dane Topaz necklace and $775 in cash. If you’re having trouble getting the necessary parts, this guide will show you Red Dead Online Buck Antler & Dane Topaz Necklace locations.

How to get Buck Antler in RDR2 Online

You can get buck antlers from hunting and skinning a buck, which is a male deer. They’re one of the most common animals in the game, and you’ll find lots of them in the temperate, eastern regions. You can find them in Cumberland Forest, the border between Lemoyne and New Hanover, and along Roanoke Ridge all the way down to Bluewater Marsh. 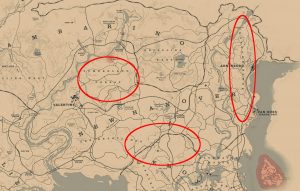 The Dane Topaz necklace can be obtained as part of the Lost Jewelry collection, if you’ve upgrade your Collector role enough. You’ll need the metal detector for some of these, so you might want to beef up your rank, if you haven’t already. It changes its location every day, on a six-day cycle – you’ll find the locations for each cycle below.