There are six possible Aubrey Onyx Ring locations in Red Dead Online. Every day, the location switches, and there’s no particular order in which it happens. So, make sure to visit all six locations if necessary. It’s going to be in one of these. Check out the map below to see where you need to go. Under that is a list of brief explanations that might come in handy. 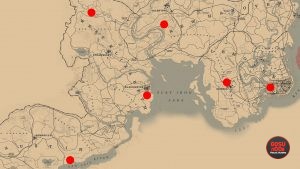 In several of these locations, the Aubrey Onyx Ring will be buried. So, don’t forget to bring your Metal Detector Kit, that indispensable tool of the Collector Role. When you find the ring, make sure to take it to Gus.

There’s a huge number of places where you can find Bighorn locations in Red Dead Online. Pretty much the entirety of the south and west of New Austin is positively lousy with them. Also, there’s eastern and southern Ambarino, western West Elizabeth, etc. We recommend the area between Coattail Pond and Valentine, but really, any will do. Shoot one, skin it, and take the horn to Gus. Once he has both the horn and the Aubrey Onyx Ring, he’ll offer to sell you the Ram Horn Trinket for $550. If you have it, picking creeping thyme, oregano and wild mint will yield twice more herbs.