Wolf School Gear is an armor and weapon set in The Witcher 3. It is one of the best weapons and armor, and it was added to the game as part of a free DLC. In this guide, we’re going to show you where to find the diagrams for crafting the Wolf School Gear, its stats and the materials required for crafting it.

Ride to the Ruined Tower north of Kaer Morhen. You’ll have to defeat a level 23 Wraith to get to the diagram, which is on a body propped up against a wall in the middle of the fortress.

Go to the Bastion west of Kaer Morhen. After you defeat the Wraiths waiting inside, look for a body in the rubble near the northern wall. The diagram for the steel sword is on it.

Go to the Signal Tower south-west of Kaer Morhen. When you enter, climb the scaffolding and open the chest on the left. The notes inside will tell you of the Wolven armor and the teleportation crystals. Climb down and examine the portals. Shoot the right one with Aard from a few feet away. Turn around and exit the room, turning right before you exit the tower. Climb up the scaffolding on the outer side and grab the crystal from the wall. Put it into the left portal, blast it with Aard, then jump into the green vortex. You’ll have to fight a level 23 Wraith in the cave – after you finish, you’ll find the diagrams on a corpse on the floor.

The Wolven Set is medium weight armor which provides moderate protection, increased sign intensity and attack power. The armor and swords both require a level 14 character. 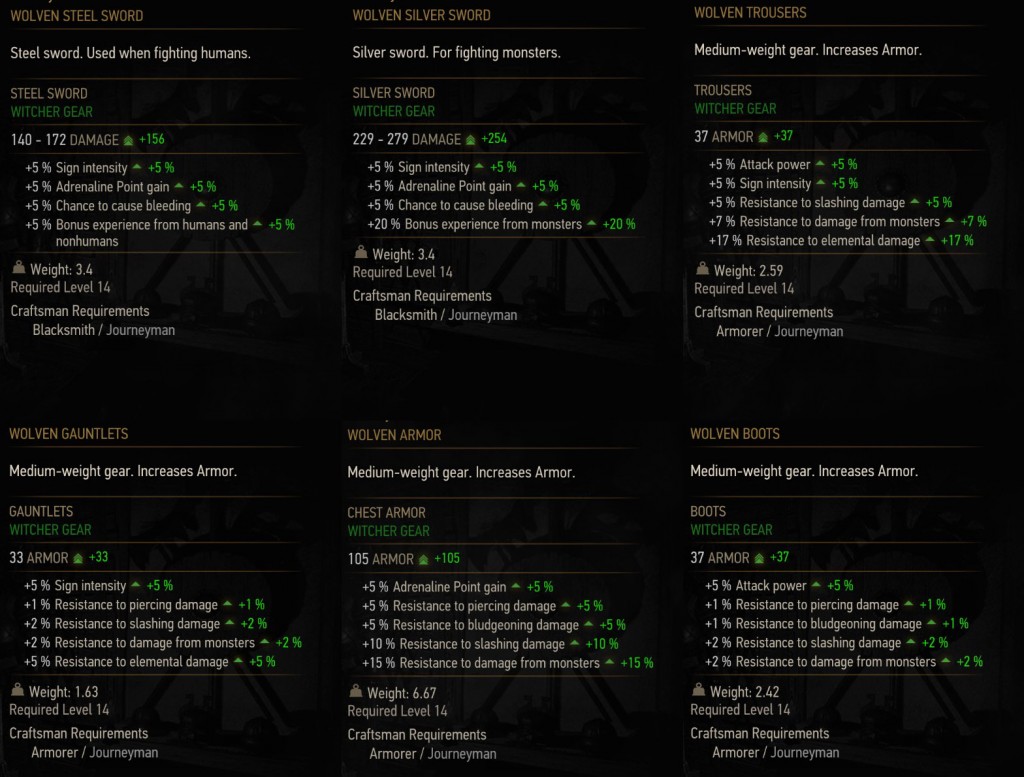 The parts you’ll need in order to craft this armor are pretty common. Most of them can be bought from merchants or obtained by dismantling old equipment. Here’s what you’ll need.

NEXT POSTEnhanced Wolf Gear | The Witcher 3