Enhanced Wolf Gear is a weapon and armor set in The Witcher 3, which is part of a free DLC. To get it, you need to upgrade the basic Wolf School Gear set. In this guide, we’re going to show you where to find diagrams for Enhanced Wolf Gear, the stats of the pieces and the ingredients required for crafting it.

Head to Crow’s Perch, in central Velen. Go past the peasants’ houses, through the garrison, to the Baron’s garden. Use the ladder to climb down the well. Take a right once you’re down – you’ll see a chest. The diagram is inside.

The steel sword diagram can be found north of Kaer Morhen, in the Ruined Watchtower. When you enter the fort, you’ll have to fight some level 23 Wraiths. Once that’s done, climb the scaffolding on the inside of the southern wall. You’ll find the diagram in a chest.

Go to the Grotto signpost, east of Lindenvale. There is a monster den south of the fast travel point – enter it and look for the chest in the largest chamber. The diagram for the boots will be in it.

There is an island north-east of the Lakeside Hut in Kaer Morhen, shaped like a triangle. A chest is hidden in the water on the south side of the island, near the shore. The diagram for the trousers is inside it.

The diagram for the gauntlets can be found in Kaer Morhen, in the mountains south of the fortress. You’ll find a monster den, with the entrance between two mountain peaks. Go inside and keep to the left. You’ll have to do some climbing. Once you reach the large room, look for the chest in the middle of it.

The final diagram is on a miniature island south of Fyke Isle in Velen. When you reach it, use your witcher senses to look for a wolf drawing on a wall. When you find it, turn around a look for a chest in the water. You’ll find your prize in it.

The Enhanced Wolf Gear is level 21, both the armor and the weapons. It’s medium weight, and just like the basic version, provides moderate protection, increased attack power and sign intensity. 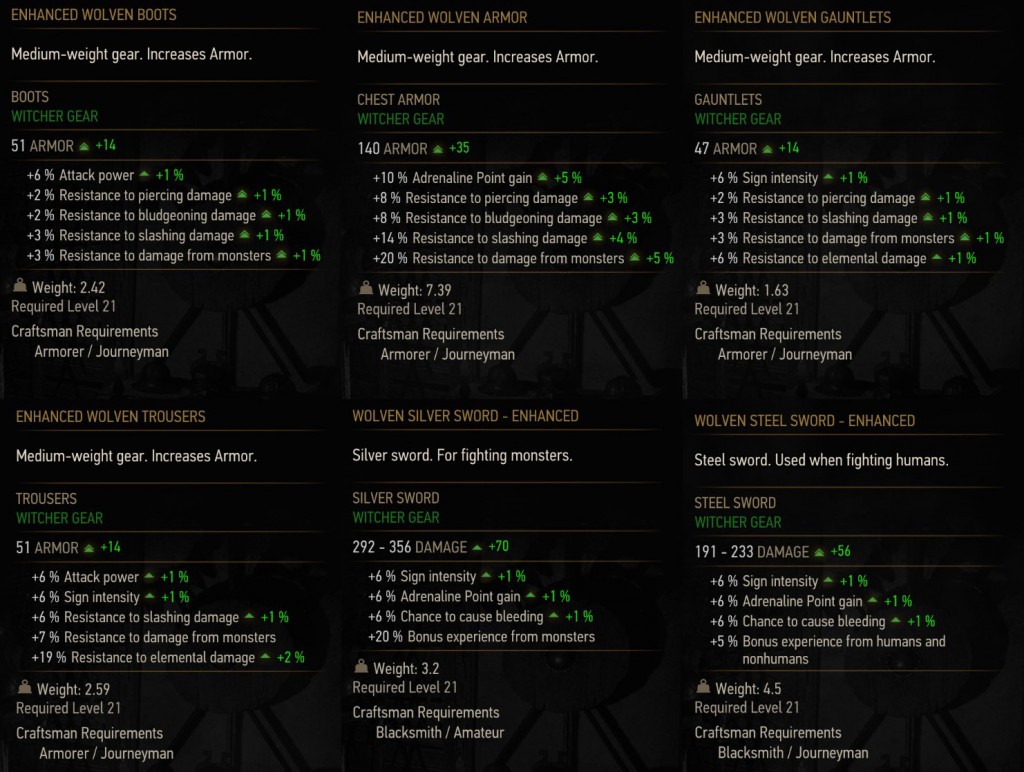 Most of the materials you’ll need are common enough – merchants sell them, monsters drop them, or you can get them by dismantling other gear. You’ll also have to find a journeyman armorer and blacksmith. Here’s what you’ll need:

NEXT POSTSuperior Wolf Gear | The Witcher 3