Superior Wolf Gear is the tier three upgrade for the Wolven armor and weapons in The Witcher 3. In order to get it, you first need to download a free DLC with the items, then find the diagrams, craft and upgrade it. You’ll need to get the basic Wolf School Gear and Enhanced Wolf Gear before you can upgrade to this one. It requires a level 29 character. In this guide, we’re going to show you how to get the diagrams for Superior Wolven Gear, what their new stats look like and which ingredients you’ll need to perform the upgrade.

In the southeastern part of the main Skellige Isle, west of Fyresdal fast travel point, within a lvl 13 Harpy monster nest. This monster nest is a small wooden fortress. In order to acquire the Superior Wolven Armor diagram you have to climb on its wall. There is a small climb spot right from where you enter the fortress. Once you are on the wall, go to the other side of it and loot the contents of the chest.

We are at the main Skellige Isle again, this time in the southwestern part. Southeast of the Arinbjorn fast travel point is an area with lots of small round tombs. Following the small road from Arinjorn you’ll come in contact with the first of three tombs. Inside it, left from where you enter is the small, green chest with the diagram.

Head to the Lofoten fast travel point on the easternmost island in The Skellige Isles map. West from there, on the higher ground, within the stone ruins where the lvl 26 Rabid rock Troll resides lies the Superior Wolven Steel Sword diagram.

Once at the ruins, find a crack in the floor that will take you underground. Inside this area you’ll find a room filled with explosive, poisonous gas. Use the Igni sing to clear the area of it. Once you enter the room head diagonally left from the entrance toward the corner. Loot the diagram and leave the room ASAP – the poisonous gas comes back rather quickly.

Go to Kaer Morhen. Following the road southwest of the main fortress, you should come to Iron Mine and its fast travel point. There is a level 30 Earth Elemental inside the largest room in the mine. In the same room, to the right from where you enter, is the small shrine with the tiny chest that contains the Wolven Gauntlets Diagram. You don’t have to fight the Earth Elemental. If you go into combat with it, simply pull back until it gives up. Run in and loot the chest.

Head to the river south of Kaer Morhen. Follow it toward the east. There is a large cave entrance, east of Kaer Morhen’s main fortress. As you enter the cave head right through its tunnels. Inside its largest room you’ll find a bunch of level 9 Endrega Workers. Within the same room, you’ll see a formation of stalagmites. The chest is behind them.

Follow the road that takes you from Kaer Morhen main fortress toward the northwest. This long road will lead you to an ancient cave. The chest with the diagram is close to the end of this cave, behind a large pillar, tucked alongside the small stalagmites.

All set pieces except the chest armor require a Journeyman armorer or blacksmith in order to be crafted. The chest armor has to be made by a Master Armorer. The stats below show the difference between the Superior and Enhanced version of the set. The most significant difference is the +5% critical chance that both Superior weapons bring to the table. 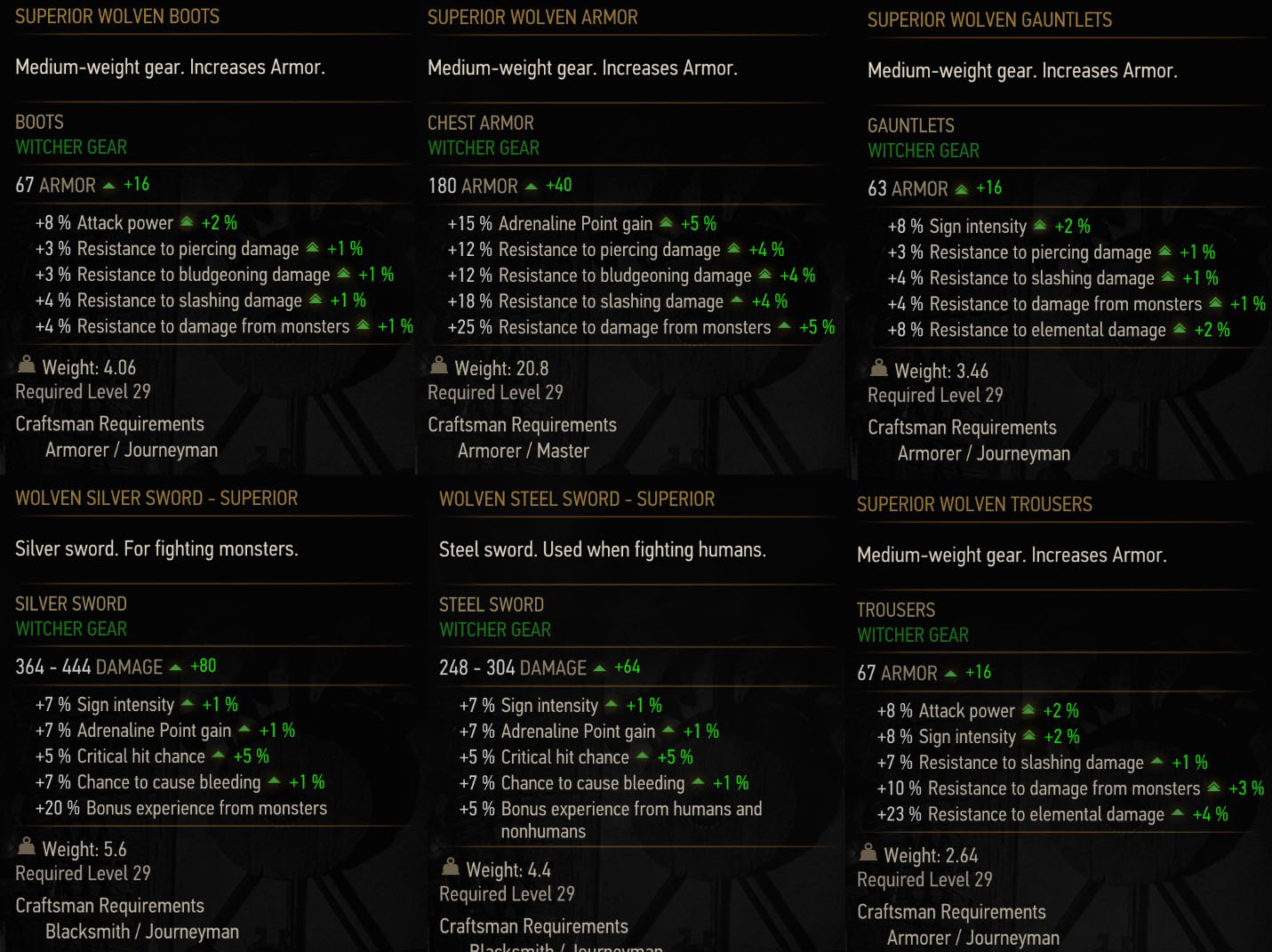 NEXT POSTMastercrafted Wolf Gear | The Witcher 3