While Assassin’s Creed has always been one of the biggest and most popular gaming franchises in the world, its games have, up until now, been self-contained stories. They did advance the overall story of the Assassin’s Creed saga, but in a standalone way. No doubt, this was done so that new players could jump into a new installment without having to play all the previous games. But now, for the first time in AC history, we will be getting a direct crossover between the two latest Assassin’s Creed titles. Titled Assassin’s Creed Crossover Stories, this event will see new AC: Odyssey and AC: Valhalla stories in which their protagonists “guest star” in each other’s games. Our AC Crossover Stories Release Time & Date guide will tell you everything you need to know about this. 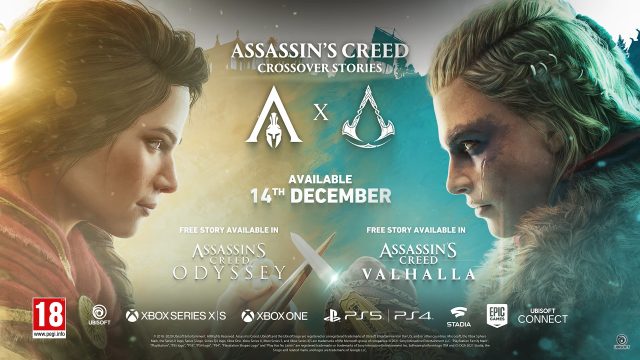 The Assassin’s Creed Crossover Stories are set to release for both games on December 14 2021, at 12 PM UTC. Both of these stories will scale to match the level of your characters. Also, since Cassandra is the canon protagonist of Assassin’s Creed: Odyssey, she will appear in AC: Valhalla, though either she or Alexios can play the new AC: Odyssey mission “Those Who Are Treasured”. It is recommended that you have finished the many story of this game, since this quest deals with end-game spoilers. On the other hand, the story of Assassin’s Creed: Valhalla is ongoing. This means that Eivor of either gender can play through the “A Fated Encounter” new content.