Skrakk is a creature in Borderlands 3. It’s a rare monster – it only appears in one place in the entire game. It’s a part of Hammerlock’s legendary hunt targets, and it has a chance of dropping the SkekSil legendary weapon, so it’s worth repeating the fight. Some people are having trouble finding it, though. If you’re one of them, this guide will show you Skrakk location in Borderlands 3, so you can complete the hunt and get that legendary weapon.

Where to find Skrakk in Borderlands 3

If you want to find a Skrakk, you’ll have to go to Ascension Bluff on Pandora. That’s the only area where it spawns. You’ll find it in the western part of the main area, along the southern border. 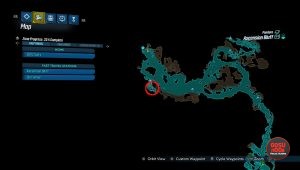 Once you’re there, you should first deal with the Skags on the ground. They’ll aid the Skrakk in battle and put you in a disadvantageous position. Once you’ve cleared those, you can concentrate on your real prey. The Skrakk is a flying creature that mostly attacks by dive-bombing. The best loadout for figthing it would be a sniper rifle and an SMG or assault rifle – something with a high rate of fire.

When it’s in the air, use the sniper to whittle down its health safely. When you see it preparing to attack, put away the rifle and get ready to dodge. While it’s near the ground, after performing the attack, use your SMG or assault rifle to put as many bullets into it before it takes off again. While it’s in the air, it flies around in easily recognizable patterns, which should help your aim.