Some Guardians have found an Easter Egg of sorts in the Destiny 2 Curse of Osiris DLC. While going through one of the adventures, they’ve apparently spotted a floating body, hidden behind a closed door. This might be the body of a pretty famous (and significant) character from Destiny lore. Right now, you can’t enter the chamber, but that could change.

The first expansion DLC for Destiny 2, Curse of Osiris, has launched (for more info on the DLC, check out our other Destiny 2 Curse of Osiris articles, including Destiny 2 Mercury Regional Chests in Curse of Osiris and Destiny 2 Lost Prophecies – How to Craft Vex / Osiris Weapons). Needless to say, intrepid Guardians have immediately begun to explore Mercury and everything it has to offer. And, as Reddit user _Wolvhammer_ discovered, there seems to be more than meets the eye for Guardians that are willing to look. Spoiler alert: There are some pretty hefty spoilers coming along. If you want to find this little surprise on your own, consider yourself warned.

Apparently, Wolvhammer came across this Easter Egg during the adventure called Up and Up. He and his group ended up in the “dark future” and went snooping. As it turns out, there’s a fairly large, diamond-shaped door there, with a hole in the middle of it. If you peer inside, you’ll notice what’s clearly a body inside the chamber, suspended in mid-air. Add a little bit of a sniper zoom, and we get what everybody seems to agree is the body of Saint-14. We can’t say for sure, of course, but it does look like him, as you can see below (image via _Wolvhammer_).

Now, of course, nobody’s quite sure what to make of this. People are throwing different ideas around. Some think that this might be some kind of strike (or maybe even raid) that isn’t available yet; others believe that it’s just an Easter Egg. We’ll just have to wait and see. Either way, if this is Saint-14, then Bungie has killed off yet another major character. 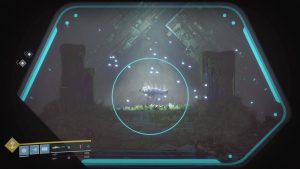