There are eleven Lost Prophecy weapons in Destiny 2. They’re special legendary weapons added in the Curse of Osiris DLC. They can’t be obtained as random drops – only through completing the Lost Prophecies on Mercury, which are a new kind of activity governed by Brother Vance. Since there’s so many of them, and you can choose in which order you’ll tackle them (at least to some extent), players are wondering which verse unlocks which weapon – and that’s exactly what we’re going to show you in our Destiny 2 Lost Prophecies & Forge Weapons guide.

The verses seem to be on a weekly rotation, as only three were available to use after we completed the first one. We’re going to update this page when we have more info.

The first verse will yield a legendary scout rifle called Garden Progeny 1, decorated with copper elements, an animated scope and a tubes with something running through them. It has room for 14 bullets in the magazine, and fires 150 rounds each minute. It has a high impact frame, which lowers its rate of fire but increases damage. This means it’s best when you’re not moving, and are using the scope. Precision kills reduce the time it takes to reload the weapon. 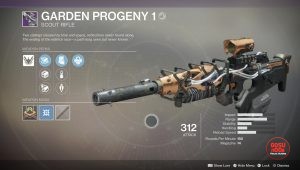 The third verse will reward you with a legendary handcannon, called Jack Queen King 3. It’s made of the expected worn green metal, and has a copper coil where the barrel should be. The magazine can take 12 bullets, and the pistol outputs 150 of them each minute. It has a perk that lets you move faster when you have it equipped, and a trait that puts some bullets in the mag every time you get critically wounded. 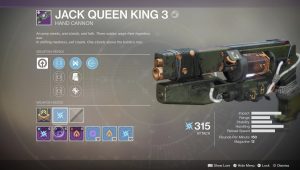 The fourth verse will let you craft a pulse rifle called Machine Dei 4. It’s a bulky thing, with recognizable forge elements – dark colors, brass add-ons and various tubes going everywhere. It fits 30 shots into the mag, and can fire up to 320 round per minute. It has a trait called Ambitious Assassin, which overloads the weapon based on the number of rapid kills before reloading. 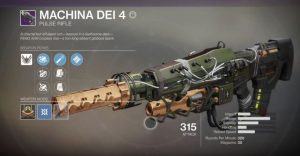 The sixth verse unlocks a submachine gun by the name of Sol Pariah 6. This one can fire an amazing 600 bullets per minute, from a magazine that holds 30. It reloads part of the magazine on melee kills, thanks to the Grave Robber perk. It has a lightweight frame, which lets you move faster while you have it equipped, but also improves handling. 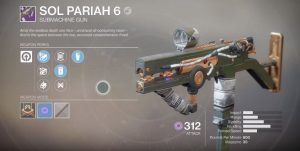