Rat King is an exotic sidearm in Destiny 2. You can get it by completing a long quest chain later on in the game. It’s a pistol with engravings of rats, with some pretty peculiar perks. Be prepared to sweat quite a bit before you get it, as it involves doing several late-game activities. The reward will be more than worth it, though. The main point of this weapon is the fact that if several members of your fireteam carry it and they are close to each other, the weapon’s rate of fire and magazine size increase, increasing the whole group’s damage output potential as well. The other perk this gun has is called Vermin, and it grants invisibility when you reload right after a kill. If you’re ready, scroll down for a full walkthrough of the Destiny 2 Rat King exotic sidearm quest.

The first step to getting this quest is to complete the Destiny 2 story campaign. That way, you’ll get access to a bunch of new world quests. The one you want is Enemy of my Enemy, which is on Titan. Head over there, complete the quest, and you’ll get the item called Rat King;s Crew. Event though it’s not a weapon, it will take up a Kinetic slot in your inventory. That’s where you’ll have to solve four riddles. Let’s see how to solve them.

How to solve the Rat King’s Crew riddles? 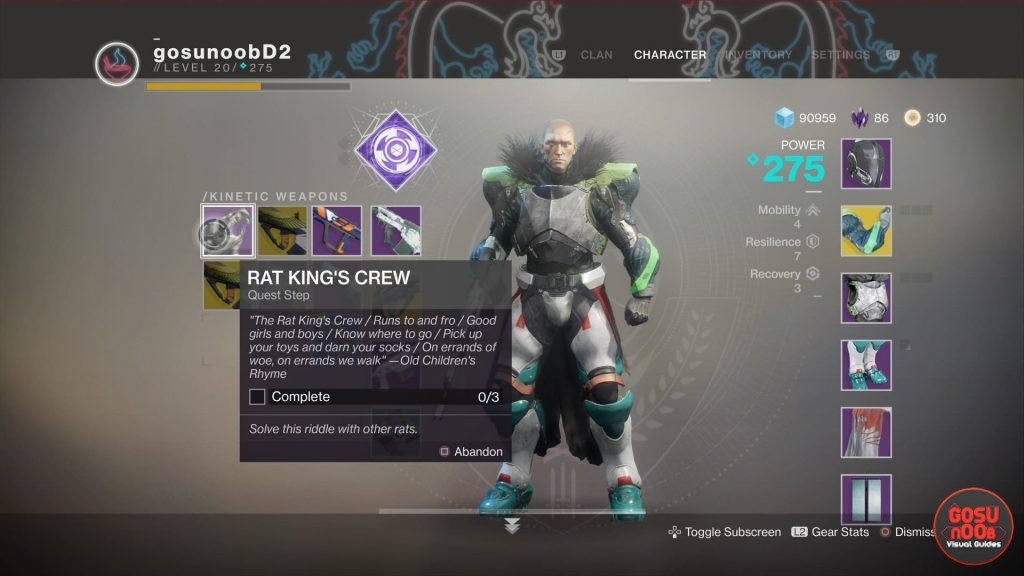 There are several riddles you will have to solve during the course of this quest-line. There is a common theme to all solutions and that is to be a member of a fireteam while doing this. You will not be able to complete these quests without at least one more player being part of your team. Following are all the riddles and their solutions:

“The Rat King’s Crew runs to and fro, good girls and boys know where to go, pick up your toys and darn your socks, on errands of woe, on errands we walk.”

Although pretty nebulous the whole thing is about doing patrols in a fireteam. If you haven’t unlocked doing patrols on planets you will first have to go visit Cayde-6 on EDZ and finish the quest he gives you. Solution to the first Rat King riddle is complete three Patrol Missions as part of a fireteam.

“The Rat King’s Crew goes arm in arm, to fight as one, to do no harm, so have your fun and run outside, rally the flag and we’ll never die.”

Solution to the second Rat King’s Crew riddle revolves around the “rally the flag” part, which hints at public events. Finish two Public Events as part of a fireteam to solve the second riddle and advance the questline.

“The Rat King’s Crew goes four and four, with good good fights they learn to score, then three as one they stand upright, return from past the wall and wanting more.”

This one is a little more transparent than the previous two, admittedly. What you need to do is go to the Crucible with your fireteam and have fun. You have to complete two matches in the Crucible while in a fireteam. Doesn’t matter if it’s Competitive or Quickplay.

“The Rat King’s Crew stands three as one, they see Night’s fall and fear it none, but watch the clock as you scale the wall, lest five remain hope comes for none.”

The fourth Rat King riddle is the easiest to figure out, but arguably the most difficult to pull off. The task is to complete a Nightfall Strike with five minutes left on the clock. This has proven to be a challenge during all nightfall strikes so far (they change weekly). With high enough power level and a good group it is doable and just needs a bitr of practice and knowing strike strategies. 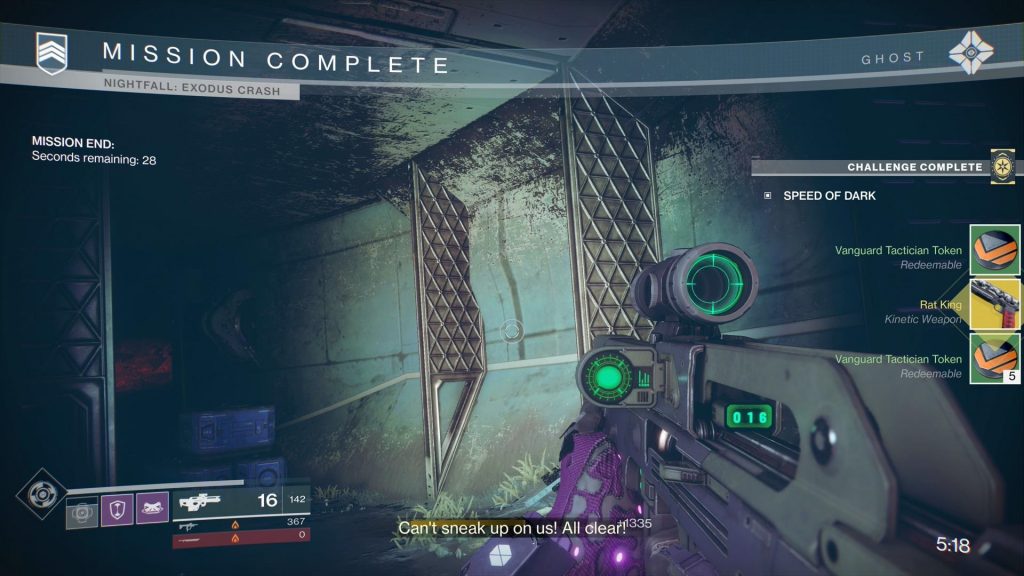 Here’s a TL;DR version of the steps needed to acquire The Rat King Exotic:

PREVIOUS POSTGW2 Jackal Mount – How to Obtain in Path of Fire